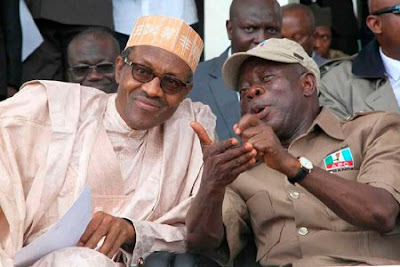 National Chairman of the All Progressives Congress (APC), Comrade Adams Oshiomhole has given the President a pass mark in his first 100 days in office, saying the government has done very well.

Oshiomhole said in Abuja on Friday evening that “President Buhari can beat his chest to say I have started well, I have started fast. You cannot call him Baba go slow now, this time he is Baba fast.”


He said: “Everything is about comparism. Because in 2015, after a hundred days we did not have a federal cabinet, the President had not appointed ministers. This time in hundred days, from my interaction with a number of Ministers, even the budget for 2020 is already being prepared.

“Ministers have been assigned to their various Ministries. They have already started the process of taking over and trying to understand the challenges. Government is already effectively on ground. So even that alone shows a remarkable departure if you compare what the President has done in 2019 to what he has done in 2015.

“Even the current issues in South Africa, the prompt manner in which the President reacted and took bold steps and sent a clear message to South Africa that we are not about to accept Nigeria being humiliated in their businesses. I think the bold step he has taken is refreshing.

“The President has been engaging various groups. Recently, he was talking to the Nigeria Society of Engineers, several professional groups, reminding all of us that we have our role to play in the Nigeria project.

“As a Party, we have every access to the President, we see him any time we want to see him and share with him whatever we want to do. You notice that this time, the President also organized a retreat for Ministers immediately they were appointed. That retreat was not about entertainment, it was to discuss about Nigeria and the administration’s policy choices.

“And of course, reminding the Ministers about the fact that there is huge expectation out there at a time of dwindling resources. Now government challenge is where do we cut cost so that we can find resources we need to sustain investment in infrastructure.”