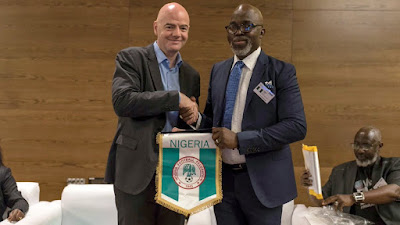 The Nigeria Football Federation (NFF) has denied any wrongdoing and explained that the investigation being carried out by the Economic and Financial Crimes Commission (EFCC) on the football body is not in any way new.

The NFF says the investigation is a process that actually started several years ago over issues preceding the 2014 FIFA World Cup and long before the present administration headed by Mr. Amaju Melvin Pinnick came into office in September 2014.

The NFF disclosed that the anti-corruption agency is only concluding the process presently and seeking clarifications where necessary.

“We feel this clarification is important in view of the misconceptions generated by the story on the new investigation.


“There has been an attempt to twist and reconstruct the truth – which is unfortunate because the facts were clearly stated as pre-2014 FIFA World Cup matters, and the assumptions and presuppositions have led to concerns, unnecessary, in some quarters.

“The NFF wishes to reiterate that it has nothing to hide, and once again firmly denies any wrongdoing. Any individual or organization can be investigated or asked for clarification on matters in their domain.

“Investigations of all kinds have been conducted on the NFF and its officials over the years, so there is nothing newsworthy about it.

“Furthermore, it is the same group of traducers and disgruntled fellows who have been hawking basically the same petition to various agencies such as EFCC, ICPC and SPIP, so there is nothing new as far as we are concerned.

“For the records, and as we have always maintained, our books are there for anyone to check and our financial records are there.

“Our auditors remain the globally – renown PriceWaterHouseCoopers and we have always published our audited accounts in major national newspapers,” the 1st Vice President of the NFF, Barrister Seyi Akinwunmi said.

Earlier, it was reported that the NFF was facing a further corruption probe, with the NFF saying the report did not situate the said investigation appropriately and professionally.

“We know that Government is continuous, but events that happened before the present NFF administration came into office are entirely beyond its purview.

“All the same, our officials have co-operated as much as they can to provide any clarification required on this matter, and everything is proceeding smoothly.

“It also must be stated that FIFA Forward Programme money is for specific sub-heads such as technical development, payment of salaries of contract staff, Leagues et cetera.

“For the knowledgeable and to those for whom facts are sacred, FIFA Forward Programme was revamped and made robust by the new FIFA administration of Mr. Gianni Infantino when he came into office in 2016.

“There is also no investigation of any misappropriation of television rights money or sponsorship monies. Those are matters for the NFF and its partners and sponsors, and none of them has ever complained to anyone that their funds are missing.

“The NFF will continue to co-operate with all agencies whenever any issue is raised, and sections of the media who blow such matters out of proportion are not doing the image of Nigeria and the brand of Nigerian Football any good,” Seyi stated.