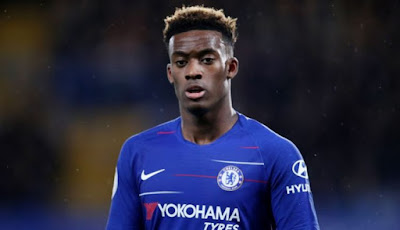 Callum Hudson-Odoi has signed a new five-year contract with Chelsea that will keep him at Stamford Bridge until 2024, the Premier League club said on Thursday.

Hudson-Odoi’s previous deal was set to expire at the end of the season and he was heavily linked with German champions Bayern Munich, whose interest in the 18-year-old was rejected by Chelsea earlier this year.

“Callum Hudson-Odoi has committed himself to Chelsea Football Club by signing a new five-year contract,” the club said in a statement.

“His new deal commits him to the club he has trained at since the age of eight until at least 2024.”


Hudson-Odoi, who made his senior England debut in a Euro 2020 qualifier March, is recovering from an Achilles injury he suffered in April.

“It’s been a long wait but it’s done now and I’m really happy about that. I’ve been a Chelsea player since I was eight and this is the right club for me to be,” he said.