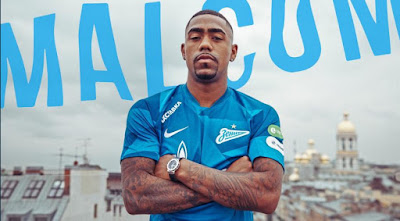 Zenit Saint Petersburg have signed Malcom from Barcelona after shelling out 40 million euros ($44.4 million) for the Brazilian winger, the two clubs announced on Friday.

The fee is one million euros less than Barcelona paid Bordeaux for him a year ago.

“FC Barcelona and Zenit Saint Petersburg have reached an agreement for the transfer of the player Malcom Filipe Silva de Oliveira. The Russian team will pay FC Barcelona 40 million euros plus 5 million euros in variables,” Barca said in a statement.

The La Liga champions added that they retain “an interest in case of a future sale of the Brazilian”, while Zenit said that they were “delighted to welcome Malcolm” to the Russian Premier League outfit.


The 22-year-old, who is yet to play for the senior Brazil side, leaves after just one season in Catalonia, during which he played 24 times in all competitions and scored four goals.

Malcom still had four years left on his contract but the arrival of Antoine Griezmann at the Camp Nou would likely have reduced his opportunities.