Yahaya Bello has performed better than all past Kogi governors 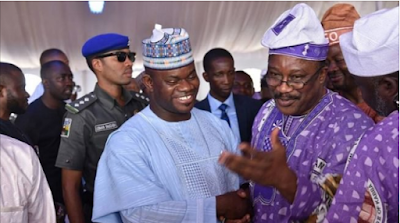 In an interview with Arise News on Monday, Adeyemi commended the governor for implementing water and road projects in the state.

He also said Bello has been able to handle the issue of payment of salaries, despite the challenge facing governors across the country.

“The land mass of Kogi state is more than about four states put together in this country that I know, and the communities are scattered. As I speak now, they are embarking on about one hundred borehole to extreme remote areas where there are no doubts and they have to provide them,” he said.

“Kogi state is one of the largest states in Nigeria. Kogi state landmass and population is far more than about eight or nine states put together. So there are many challenges that this government is facing, but be that as it may, I am of the view that he has performed far better than previous administrations that I was somehow involved.

“The second largest rice mill in Nigeria is located now in my senatorial district under Yahaya Edosa Bello. He built it from the scratch. It is about N4 billion project and we are saying that he has not done well. Now, this rice mill is due for commission. When it is commissioned, not less than four to five thousand workers will be at that rice mill. We also have quite a number of roads under construction.”

Adeyemi also said the governor has been investigating the problem of ghost workers in the state.

Meanwhile in an interview with TheCable, Simon Achuba, deputy governor of the state, said Bello was yet to complete a single meaningful project since he assumed office.

“He has just been able to accomplish a few (projects) and then say, ‘Oh, I am coming to yours. I am taking it one by one.’ It is understandable, but when you are not able to even accomplish one in four years, it makes no sense,” he said.