Why we arrested 140 ‘northerners’ coming into Lagos — Police 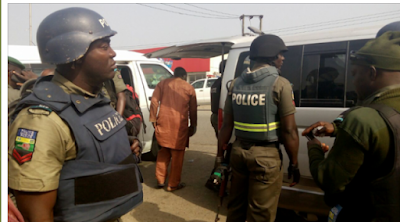 The police in Lagos on Saturday explained why they blocked a truck carrying citizens from northern Nigeria and arrested its occupants.

Lagos police commissioner, Zubairu Muazu, said the arrests were carried out as a preemptive security measure against the backdrop of worsening insecurity across the country.

The 911 truck was riding into Lagos yesterday afternoon when police and Lagos government officials pulled it beside the road and ordered all occupants to alight.

The citizens, who were mostly young, had squeezed themselves among a cluster of motorbikes they were bringing into Lagos with them.

On Wednesday night, Lagos State uploaded a video of the incident on its official Twitter handle, drawing criticisms from some users who accused it of criminalising movement of citizens.

Lagos authorities did not immediately say whether anything was found on the arrested citizens that could indicate they were a security threat.

But Mr Muazu revealed that the police were responsible for the arrest, saying it was not because the citizens were northerners or okada riders.

“When you have people coming into Lagos enmasse, you have a duty to accost them and profile them and find out who they are, where they are coming from and what is their mission in Lagos,” Mr Muazu said.

“The movement is suspicious: They are not cows, and they are not yams, but they are coming in just like that. They could even be victims of human trafficking,” he added.

The police chief said about 140 persons were arrested and taken into custody on Friday from the single truck.

But he was unable to categorically say whether detectives found any sinister plots against them or when they would be released after being profiled.

“I have detailed some officers to thoroughly investigate the incident and submit their report to me in a short period of time, but I have not heard back from them as of this morning,” the commissioner said.

Lagos has become one of the main spots for relentless monitoring by security agencies since Boko Haram crisis began 10 years ago.

Still, a large number of okada riders in the nation’s commercial capital came from the northern parts of the country.

The state has grappled with high crime rates, especially armed robbery, burglary and pickpocketing, for several years, many of which had been regularly linked to commercial motorcyclists.

The criminal acts, as well as traffic disruptions, linked to commercial motorcyclists compelled the state to introduce heavy restrictions in the sector between 2011 and 2012.

The restrictions further complicated movements for the state’s nearly 20 million people, most of whom rely on commercial transportation.

Over the past two years, however, the state has been registering bike-hailing businesses, an initiative widely seen as bringing sanity into the sector.

A security analyst, Tunde Adenaiya, said the latest arrests were insensitive and divisive, especially as authorities have not released any data showing which ethnic group is largely responsible for ‘okada-related crimes’.

“It is okay to stop the vehicle and question its occupants, but it is grossly insensitive and divisive to make it public in the manner the Lagos authorities did,” Mr Adenaiya said.

The analyst said the prevailing security situation did not call for unnecessary and antagonistic profiling of citizens, especially when done in a manner that exposes them to humiliation.

“They are Nigerians,” he said, “notwithstanding their ethnicity or social status.”

A Lagos government spokesperson, Gbenga Omotoso, said the development stemmed from routine security checks and should not be taken as antagonistic towards northerners or any other ethnic group in the country.

“It was a routine security check because of the ongoing security challenges across the country,” Mr Omotosho said. “But it should not be misinterpreted as an attempt to victimise northerners it drive any ethnic group out of Lagos.”

Mr Omotoso, the state’s information commissioner, said the truck would still have been intercepted if its occupants were from other southern regions or even another state in Yoruba land.

“It has nothing to do with the occupants being from the north,” Mr Omotoso said. “It was done strictly as a security measure because of the large number of people inside.”