VIDEO: ‘I was free in Nigeria, lived next to senate president, never in police detention…’ -El-Zakzaky

Ibraheem El-Zakzaky, leader of the Islamic Movement in Nigeria (IMN), has returned to Nigeria after a ‘medical stalemate’ in India. 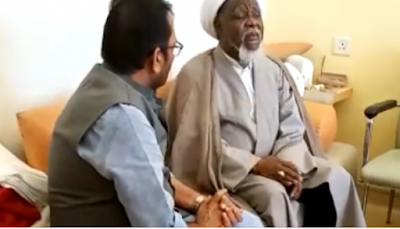 Before his return, he alleged that the Nigerian government was making it difficult for him to get the needed treatment at Medanta hospital, India, and that he was being treated like a prisoner in the country.

In the video, the cleric, while at the hospital, could be seen detailing his experience to an unidentified Indian official.

He told his guest he made the trip at his own expense, but wondered why the Nigerian government was frustrating his mission.

”They said I am the one to take myself to hospital, not the government.  We bought our own tickets, the government people with us bought their own,” the healthy-looking Islamic cleric said.

”Somehow, when we came here,  we learnt the embassy changed the story. We learnt the Nigerian government told them they are bringing in two patients charged with a criminal offence, and they also solicited the support of the Indian government for the security of these people; they also spoke with the hospital about what to do. And they claimed they are the ones bringing us.”

He said he enjoyed some level of freedom in Nigeria unlike in India where he is in ”prison”.

”I have been about four years in prison now; a house fully furnished. In fact, our next neighbour was the senate president; a large house. I was free to move about. Similarly, when they moved me to Kaduna I was in the best best area – government reserved area. It is a house fully furnished with large bedrooms and I was free. I have never been in detention with police there; in fact, the soldiers used to stay outside at the gate. That is what they have been doing. When we came here we were put in prison.

”I will definitely prefer another hospital. I was told that some Shi’ite Ulama came and said I should be allowed to be treated in India.”

The federal government said the IMN leader wanted to seek asylum in India and relocate to another country.