‘Typo on Buhari’s certificate’, ‘Atiku from Cameroon’ – controversies at the presidential tribunal 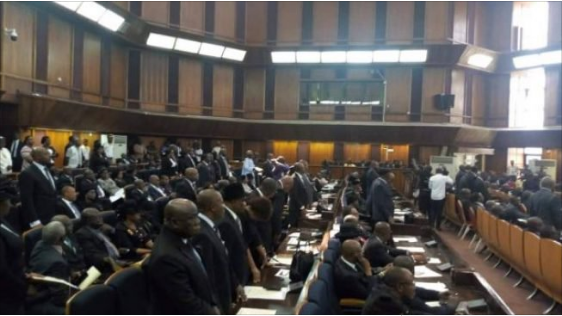 About four months after whirlwind proceedings, the presidential election petition tribunal has scheduled August 21 for final arguments in the petition filed by Atiku Abubakar, PDP presidential candidate, against President Muhammadu Buhari, challenging the outcome of the election.

On Thursday, the president’s legal team closed its case, which it opened on Tuesday, at the tribunal after calling only seven witnesses.

Wole Olanipekun, lead defence counsel, said closing the case was to “restrict the legal duel to the four corners of this honourable court’’. The proceedings in the past few days have re-awakened slumbering controversies.

Since May 8, when the tribunal commenced sitting, there has been a twirling of claims and counter-claims by the parties to the case.

On May 16, the legal team of the former vice president filed a motion asking Zainab Bulkachuwa, president of the appeal court and chairman of the tribunal, to recuse herself from presiding over the case. It alleged that the judge was the wife and mother of two prominent members of the APC and that she could show bias in handling the matter. A firestorm of reactions followed afterwards.

Bulkachuwa had presided over the first few proceedings of the tribunal, and she had pledged that “justice will be done to all parties without fear or favour, affection or ill-will.”

On May 22, she announced her withdrawal from the panel. This was despite a judgment dismissing the motion seeking her recusal.

‘’I am recusing myself from the panel for personal reasons’’, she said. She also said the judgment was a precedent for future cases of similar bent.

Besides Bulkachuwa, there are judges whose spouses are politically-exposed persons, and with peculiar cases such as this, the intricacy of the law will always be tested.

ATIKU ‘NOT CITIZEN’ BY BIRTH

In its response to the PDP petition, the APC claimed Abubakar is not a citizen of Nigeria by birth, and that he ‘’ought not to have even been allowed in the first place, to contest the election’’.

The Nigerian constitution prescribes citizenship by birth as a requisite for the office of president.

In its counter  appeal, the party said: “The parties are not entitled to any prayers being sought by them’’, and it urged the tribunal to “dismiss the petition with substantial cost as same is devoid of any merit and also founded on frivolity, having not been initiated bonafide but on palpable abuse of judicial process’’.

Nnamdi Kanu, leader of the proscribed Indigenous People of Biafra (IPOB), had actuated the controversy over the origins of the PDP presidential candidate. He claimed Abubakar is a citizen of Cameroon and not of Nigeria, having had his place of nativity in a part of Adamawa that was a portion of northern Cameroon until the plebiscite of 1961 which wedded that area of Cameroon with Nigeria. Abubakar was born in Jeda in November 1946 before the unification.

The APC couched its case on this claim and argued that “votes purportedly cast’’ for Abubakar were wasted.

Abba Kyari, chief of staff to the president, who appeared before the tribunal on Wednesday, re-emphasised this claim.

This is a grey area in Nigerian law that the courts will have to interpret to enrich the jurisprudence.

SERVER OR NO SERVER

One of the claims of the Abubakar legal team is that an alleged INEC server contained figures, which put the PDP candidate in the leading gear over the APC candidate.

The PDP and its presidential candidate, through their counsel, Levy Uzoukwu asked the tribunal to order INEC to grant them access to its server and smart card reader records.

The petitioners claimed that from the data in lNEC’s “server’’, the results from state-to-state computation showed that Abubakar had a total of 18,356,732 votes to defeat Buhari who had 16,741,430 votes.

However, Yunus Usman, INEC counsel, in a counter affidavit urged the court to reject the application.

“They are asking us to bring something we do not have,” he said.

‘’My Lord, the commission did not deploy such technology infrastructure in the last general election.’’

INEC has been emphatic in its position that there is no server for the 2019 election. Though it admitted it mulled relaying results from the field electronically, the commission said it jettisoned the idea owing to budgetary constraints.

The electoral umpire also said it only experimented with transmitting results electronically in Anambra, Sokoto and Osun elections.

The tribunal will decide if the petitioners proved their case in this regard, though there were some inconsistencies in the testimonies of the witnesses they called.

A highlight of the proceedings at the tribunal is the furore over Buhari’s “missing’’ certificate.

The PDP argued that Buhari was not eligible to vie in the 2019 presidential election for not submitting his credentials to INEC as required by law. It also claimed the president did not have the minimum qualification to run for the election.

Adewunmi, a witness called by Olanipekun,  said this while being cross-examined by Uzokwu.

The former WAEC official, however, added that Cambridge certificate presented to the tribunal has a typographical error.

He explained that the Cambridge certificate has “Mohamed Buhari” rather than “Muhammadu Buhari” as the name of the second respondent.

He also said though the Cambridge certificate has six subjects, the president sat for eight in 1961.

These discrepancies are stoking renewed controversy over Buhari’s ”certificate”. And this issue may not be going away soon.