Soldiers opened fire on Police, took me to their HQ, cut my handcuffs — Kidnap kingpin 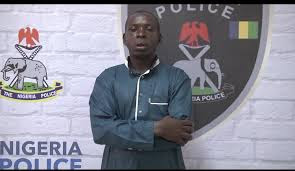 Captured suspected kidnapper, Hamisu Bala Wadume, has explained how he escaped from the operatives of Intelligence Response Team on August 6.

Wadume escaped from the custody of IRT operatives when they came under attack from soldiers attached to Battalion 93, Takum, Taraba State, as they conveyed the kidnap suspect from the scene of his arrest.

The Army later explained that the soldiers attacked the IRT operatives when they mistook them for criminals, following a distress call they had received.

In the said attack, three policemen and a civilian were killed, while five other operatives sustained injuries.


Wadume was, however, re-arrested on the eve of Monday, August 19, Force spokesperson Frank Mba said on Tuesday (today).

In a video clip posted on the verified Twitter handle of Nigeria Police Force on Tuesday, Wadume, who spoke in Hausa, virtually implicated soldiers at the Battalion 93, Takum, Taraba State, in his escape from the IRT custody.

Wadume spoke in Hausa, which was interpreted by our in-house staff member.

The suspect, who is alleged to have received millions of naira as ransom from his victims, said, “I am Hamisu Bala also known as Wadume. The police came to Ibi and arrested me.

After arresting me, they were taking me away when soldiers went after them and opened fire and some policemen were killed.

From there the soldiers took me to their headquarters and cut off the handcuffs on my hands and I ran away. Since I ran away, I have been hiding until now that the police arrested me.”