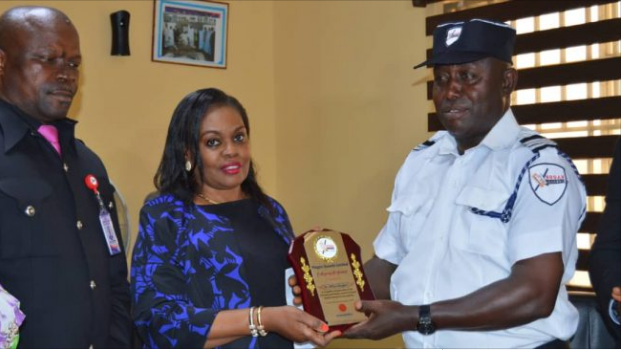 William Okogbue, a security guard with Hogan Guards Limited, formerly known as Guardsmark, has been rewarded for returning a bag containing $10,000.

On Thursday, the management of the security outfit rewarded the 46-year-old indigene of Anambra state at a programme in Lagos state.

Okugbue narrated that while on duty at an Ecobank branch in Abacha estate, Wuse 2, Abuja, in July, he found a bag in the banking hall, picked it up and discovered some dollars inside.

He said he took the bag to the toilet, where he counted the money and discovered that it was $10,000.

He added that he reported the situation to the customer service manager of the bank who held the bag until the owner came to claim it.

“It is my pleasure to be in Lagos today to be celebrated. I work as a supervisor for Hogan Guards. I’ve been working in Ecobank for almost ten years. Somebody forgot their bag in the banking hall and it contained $10,000,” he said.

“When the owner came, he introduced himself as a former deputy governor of the Central Bank of Nigeria in Abuja to my customer service manager whom I reported the matter to.

“My CSM interviewed him and gave him the bag. He was very happy and he said he would take it up because he had never seen someone like me. So, he took me to the manager and here we are.”

“Hogan Guard trained me to be who I am; we were trained to do the right thing always,” he said.

“I am not rich but those values have been put in me. If I had taken the money, I will be in problem, Hogan Guard, Ecobank will also be in problem.

“When I picked the money, I took the money to the toilet, checked if it was real or fake…I said God, is this a temptation or what. I prayed to God…one part of me was telling me to take the money and run, another said I should return it. I was inside the toilet for almost one hour.

“Now, I have been given a letter of appointment as a full staff; Ecobank gave me a letter of recommendation. I feel good about it. People abused me on Facebook that I want to remain a poor man, that I should have taken the money. But my advice to people is that whatever will be your own will be, just trust God and don’t tamper with things that are not yours.”

Chukwuemeka Pindas, chief operating officer of Hogan Guards, said Okogbue displayed the core values of the organisation, adding that their efforts to be top-notch is not in vain.

“We live in a world where integrity is not well preached, only how the end justifies the means. But for us in Hogan Guards, it is a no, which the action of the gallant officer has exemplified our core values,” Pindas said.

“We have gathered here to celebrate him and we are giving him a permanent appointment as Hogan Guard staff. We’re sure that the training, visits, supervision are not in vain. We can see that in the exemplary lifestyles of our staff.”