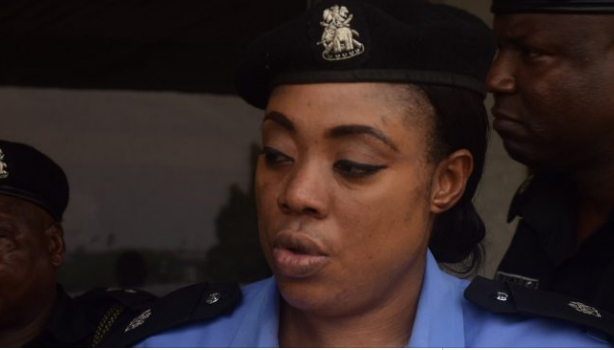 Badmus said this on Thursday while reacting to the killing of three policemen and a civilian by soldiers in Taraba state.

The soldiers had attacked operatives of the intelligence response team (IRT) of the inspector-general of police who had arrested Hamisu Bala, a kidnap suspect better known as Wadume, and subsequently set the suspect free.

The police, however, rearrested Wadume on Tuesday.

Badmus said the fight against insurgency is not over because sister security agencies sabotage the efforts of one another.

She cursed those working against the well-being of Nigeria, saying “May you all die sudden death”.

“Firstly, that a criminal who was painstakingly arrested by operatives will be made to escape is unfortunate….not only is the escape unfortunate but that five lives(3 of the police and 2 of their informants) were allegedly wasted under the supervision and directives of a superior officer of other security agencies is still baffling and incomprehensible,” Badmus said.

“When we continue to think about insurgencies and reason why it has refused to end, this if not the only, is the reason why it could or would not end! PURE SABOTAGE! While some operatives are working tirelessly to end kidnapping, robbery and terrorism, some are busy sabotaging their efforts just because of material gains.

“For every security personnel and all others working against the well being of this nation, may you all die sudden death for Nigeria to have peace!”

She commended the police and Nigerians who were involved in the rearrest of Wadume.

“We are all folding our hands to see and hear the outcome of the investigation,” she said.

“Surely the revelation will be startling…..May the soul of the dead officers and the civilian involved Rest in Peace and may God give the family the fortitude to bear this unfortunate and irreparable loss.”