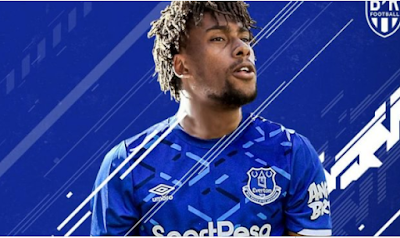 Alex Iwobi, Super Eagles’ forward, left Arsenal for Everton because of his desire to play his preferred position of central midfield.

TheCable reports that a member of Iwobi’s family revealed that Iwobi also had no choice but to leave the north London club so as to get a regular playing time with the Toffees.

“He left because of his desire to play in his preferred position in the centre of the midfield,” the family member said.

“And also to play regular football at Everton.”


“Everton is an ambitious club with a long tradition and he desires to be part of the history going forward.”

The relative further revealed that Alex’s humility and respect for his coaches is unequalled.

“He [Alex Iwobi] spoke with the manager before signing and he [Unai Emery] informed him that the club had been following his progress for quite some time now and his style of play suited the team,” he said.

The 2019 Africa Cup of Nations bronze medallist has desire to learn and to keep improving his performances for club and country, the source said.

“Alex is looking forward to the challenge and as usual will give his best. He is also looking to meeting his new team mates while calling on Everton fans to stand behind the team in their efforts to have a successful season,” he said.

Everton completed a post-deadline deal to sign the 23-year old on a five-year deal on Thursday night.

He made 149 appearances for Arsenal and scoring 15 goals since his senior career in 2015.

He played 35 league games, including 22 starts, for Arsenal last season — his highest — and scored three goals.