Presidency to RevolutionNow protesters: Nationwide voting is only way to change govt 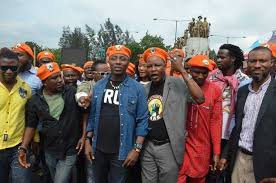 The Presidency yesterday, in response to plans for a nationwide protest today, has said that the only way to change government in a democracy was through the electoral process.

Sowore, Presidential candidate of the African Action Congress, AAC, in the February 23 Presidential election, was planning a series of protests, under the aegis of #Revolution Now against bad governance in the country, as a result of which he was arrested by operatives of the DSS in the early hours of Saturday, and subsequently moved from its facilities in Lagos to Abuja.

The Presidency, in a statement signed by the Senior Special Assistant to the President on Media and Publicity, Mallam Garba Shehu, said that the government would always welcome peaceful protest by the citizenry to express their grievances, but noted that peaceful protest was different from incitement for revolution. It further told those behind the planned revolution to reveal their identity and not to hide under the group to cause problems in the country.

The statement read: “Following calls circulating on social and digital media, an organisation that calls itself the “Global Coalition for Security and Democracy in Nigeria” plans a “revolution” march tomorrow (today) August 5, with the aim of bringing “regime change” in Nigeria without recourse to a nationwide vote. “The President of Nigeria and his administration respect and uphold the right of every Nigerian to peaceful protest and civil campaign– whether to raise awareness on issues, and even oppose the government. It is the inalienable right of all citizens of the Federal Republic of Nigeria to do so."


There is, however, a difference between peaceful call to protest and incitement for a revolution. The organisation championing this planned action is not fronted by any serious public faces. We call on the sponsors and organisers to have the decency to come forward and make their identity known – out of respect to all Nigerians – so that Nigerians can be fully aware in whose name this “revolution” is being proposed and who the beneficiaries may be. “Less than six months ago, Nigeria held simultaneous presidential and parliamentary elections.

Both contests were won resoundingly by President Muhammadu Buhari and his All Progressives Congress, APC, party. “The campaign was observed, and results were confirmed by international election monitoring groups and observers.

The result was even contested by the losing presidential candidate and his party in court. “The ballot box is the only constitutional means of changing government and a president in Nigeria. The days of coups and revolutions are over. “Those making the “revolution” call hide behind the veil of social media modernity. But without revealing the identity of their sponsors, this shadowy campaign is no better, and no more democratic, than the days of old. “The President calls on all those who seek to use and hide behind everyday citizens to attain power through undemocratic and violent means, which has been alluded, to come out clearly and be identified. “They should lead their march in person. Only then will they begin to have the right to call themselves leaders before the people of Nigeria.”

However, the Department of State Services, DSS, yesterday moved human rights campaigner and presidential candidate of African Action Congress, AAC, in the 2019 elections, Omoyele Sowore, from its facility in Lagos to Abuja. Sowore was arrested by the DSS in the early hours of Saturday for planning a series of protests, under the aegis of #Revolution Now, against bad governance in the country. This is even as the DSS confirmed yesterday that it acted within its constitutional powers to have arrested Sowore for threatening the unity and corporate existence of Nigeria, just as Nigeria Intervention Movement, NIM, also known as Third Force, a group of Pro-democracy activists, reaffirmed its commitment to today’s protests across the country and called for his release.

Confirming Sowore’s arrest yesterday, spokesman of the agency, Peter Afunnaya, said in a statement in Abuja that the DSS acted within its constitutional powers to arrest and detain anybody or group who threatens the unity and peaceful co-existence of Nigeria. He said the secret police would not ‘’just sit idly and watch any individual, group and their cohorts rise and threaten the peace, unity, and constitutionalism of the country”.

“Though there is apprehension and anxiety among citizens already, we wish to assure friends of Nigeria, and other law-abiding citizens, that there will be no revolution of any kind come Monday, August 5, 2019,” he said.

“A democratically elected government is in charge, and we cannot allow any person or group to foment chaos or fan the ember of revolution.” He, however, declined to comment whether Sowore was at their office in Lagos or Abuja but noted that Sowore’s call for revolution posed a national security threat.