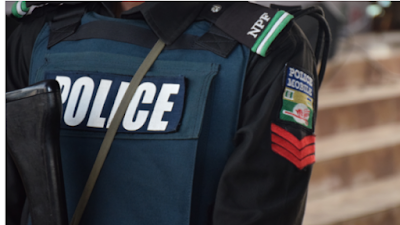 A relative of one of the Ahmadu Bello University students kidnapped on Abuja-Kaduna road on Tuesday has reacted to the claim by the police that the captives were rescued.

On Wednesday, the Kaduna police command said the three students were released by their abductors after much pressure but did not say a ransom was paid.

“The Command wishes to state that, on the said date, August 26, at about 18:50hrs, armed men in military uniform intercepted some commuters near Masari village along Kaduna-Abuja Expressway, opened fire on the vehicles, in the process kidnapped six persons,” a statement issued by Yakubu Sabo, the command’s public relations officer, read.

“Due to the prompt response of the Police and other security agents to the scene, three people were later released by the hoodlums due to intensive combing within the general area.”

Bashir Ahmad, personal assistant to the president on new media, shared a report quoting the police claim, this elicited a reaction from Sadiq Ango, a Twitter user, who said the police lied and that it took the families 48 hours of negotiations and payment of ransom before the students were released. 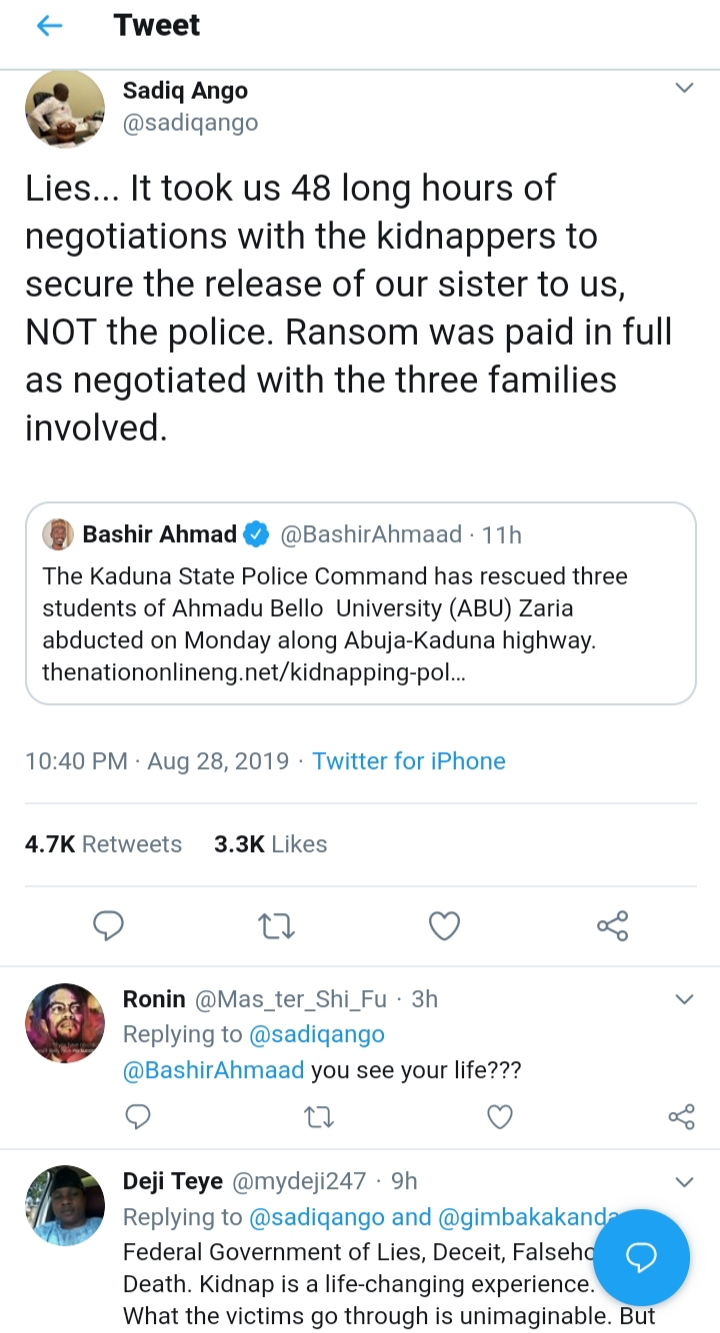 Lies... It took us 48 long hours of negotiations with the kidnappers to secure the release of our sister to us, NOT the police. Ransom was paid in full as negotiated with the three families involved. https://t.co/cKwuKJCU2p
— Sadiq Ango (@sadiqango) August 28, 2019

Federal Government of Lies, Deceit, Falsehood and Death. Kidnap is a life-changing experience.
What the victims go through is unimaginable. But one Bashir is in Aso Rock, busy tweeting whatever catches his fancies because his Sisters are somehow safe. Nobody is safe really.
— Deji Teye (@mydeji247) August 28, 2019

A government of lies.

Any rescue without the arrest of the kidnappers is a lie, ransoms was fully paid
— Don Corleone ♔ (@king_Philz_) August 28, 2019

The boldness with which he posted is like he was really sure. That was how Buhari boldly lied that he belongs to everybody and to nobody. We all know where they belong now... With the corrupt and liers.
— Mobmatics John (@mobmatics) August 28, 2019

Can you imagine someone that recently celebrated Eid telimg such a big lie to portray the administration he works under in a good light! Allah will judge you @BashirAhmaad
— Countessa (@maryamtitilayo2) August 29, 2019

Bashir, how do you sleep at night with all these lies?
— speakurmind (@LawalBabatu) August 29, 2019

A young man like Bashir will be telling lies like a thief up and down.
— Max Ndifon (@maxndifon) August 29, 2019