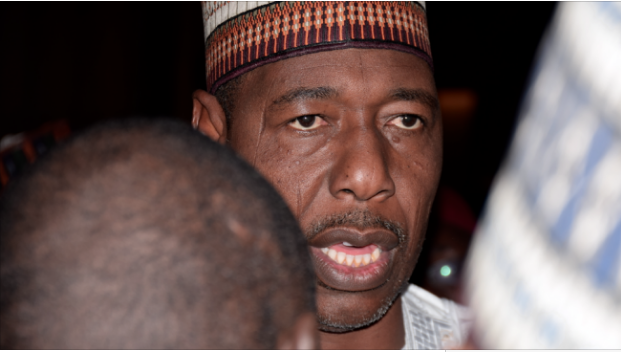 Babagana Zulum, governor of Borno state, says the decision of the military to establish “super camps” is responsible for last week attacks in Gubio and Magumeri local government areas of the state.

Boko Haram insurgents had sacked residents of the town, setting their houses and government secretariat on fire.

When he visited President Muhammadu Buhari at Aso Rock during the weekend, the governor said the idea of “super camps” had made it easy for the militants to operate without resistance.

He was responding to questions from state house correspondents.

“Well, the most important thing is that there is ongoing military strategy, according to the military authorities, what they called ‘Establishment of super camps’. That entails that all other smaller units in various villages and towns, shall be collapsed to form part of the super camps in some critical major local government areas,” he said.

“In our thinking as laymen not as military personnel, we thought this decision is not wise. We must ensure there is military presence in all the locations. We are very much aware of their numerical strength but nonetheless, their absence can create serious vacuum and that has informed the recent attacks.

“However, I heard that the military is now trying to re-establish the military formations in those areas and that they should not form part of the super camps.”

Zulum also commended the civilian joint task force but said they lacked required weapons because they are not constitutionally backed to do so.

“Honestly speaking, the civilian JTF are working but the most important thing is that they don’t have the heavy weapons that they can use to conveniently face. So the absence of the Nigerian military in a particular place will create a vacuum in such a way that the civilian JTF and hunters cannot perform effectively,” he said.

“I have told Mr. President and he has listened to our complaints, he has done a lot for the people of Borno State and it is our sincere hope that this time around, he will take necessary steps to forestall future occurrence. But most importantly, the presence of the Nigerian military in almost all the locations especially in local government headquarters, need not be overemphasized.”

The governor also said the high level of unemployment has to be addressed, saying unemployed youth could be willing tools in the hands of insurgents.

“On my own part as the governor, first of all I wish to call on the people of Borno State to be patient while we try to strengthen the civilian JTF as well as supplement the efforts of the Nigerian military as well as the Nigerian police,” he said.

“By and large, we must also address the root causes of the Boko Haram insurgency which is not limited to endemic poverty, pervasive illiteracy, financial and economic hardship, unemployment, environmental degradation, drug abuse among others. We must ensure our youths are employed. We shall support the Nigerian police and the Nigerian military, most importantly the gallant civilian JTF and the hunters to ensure that the remnants of Boko Haram are eliminated.”

The Borno State Emergency Agency had said over 70 houses and 20 shops were burnt in the attack.