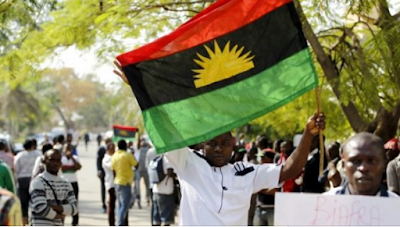 Members of Indigenous People of Biafra, IPOB, has mocked Abba Kyari, the chief of staff to the President, and other members of President Muhammadu Buhari’s inner circle, for allegedly failing to deploy their diplomatic clout to suppress them in Yokohama, Japan.

IPOB and the Nigerian Presidency have been at war of words over plans by the pro-Biafran group to embarrass and arrest President Buhari in the East Asian country where he is participating in the ongoing seventh Tokyo International Conference on Africa’s Development (TICAD).

However, a statement by Comrade Emma Powerful, IPOB’s spokesman, on Friday, claimed the President is afraid of holding public meetings outside the prestigious Hotel Intercontinental in Yokohama because of the threats by the Biafra agitators to harass him.

The statement reads, “We the Indigenous People of Biafra have taken it upon ourselves in the coming days to dissect, analyse and expose the deception at the heart of governance in Nigeria.

“Predictably, Aso Rock are doing their damned best to shield the impostor Jubril Al-Sudani from public scrutiny and accountability in Japan where the local IPOB family are dutifully waiting to apprehend him.

“Our resolve to arrest the impostor and hand him over to the Japanese authorities for trial is unshakeable.

“Out in Japan, IPOB have shown the world that Nigeria is nothing, an empty evil empire where the poor suffer in ignorance out of needless fear.

“The ruling Fulani cabal in Aso Rock headed by Abba Kyari are nothing but mere cowards who can’t deploy their famed diplomatic clout to suppress IPOB operations worldwide or avert the impending embarrassing arrest of their fraudulent impostor president Jubril-Buhari.

“We know the most likely place Jubril-Buhari is hiding is the prestigious Hotel Intercontinental in Yokohama which incidentally is where other more respectable and genuine heads of state are staying.

“So far the impostor and the cowards handling him, including the loud-mouthed Junaid Mohammed, have refused to allow the Sudanese President of Nigeria to make any public appearance in Japan or venture outside his hotel room.

“We are also aware that Jubril-Buhari is terrified and have requested additional protection from the Japanese government.

“Our special intelligence unit on the ground in Yokohama is reporting that Japanese Special Forces have now taken over the security operation at Hotel Intercontinental following our leader’s incendiary broadcast last night.

“We gather they were called in to protect other African heads of state from a likely fall-out from any IPOB action at the hotel against Jubril-Buhari.”