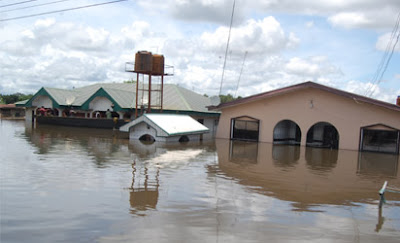 A downpour experienced across Adamawa State on Friday washed away three communities while destroying properties worth several millions, rendering many people homeless.

The state Emergency Management agency, said three communities in the Shelleng Local Government Area was washed away by the flood from the downpour.

It also noted that a temporary shelter for 300 persons, mostly women and children, displaced by the flood waters had been set up at in the Yola South LGA.

The Executive Secretary, Adamawa State Emergency Agency Although Suleiman Muhammad, added that there was no reported case of death but the downpour caused massive destruction of farmlands and properties in five local government areas.

He said, “Three communities were washed away in Shelleng as a result of the floods. We set up a temporary IDP shelter camp in Modire, in Yola South were 300 persons mostly women and children are camped. They may return back to their homes in a day or two once the flood waters recedes.