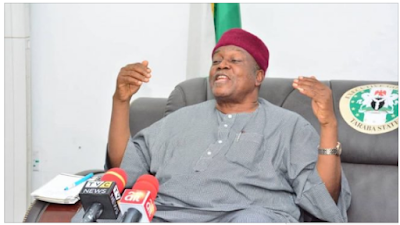 Governor Darius Ishaku of Taraba State has insisted that he did not give any money to a suspected kidnap kingpin, Hamisu Bala, popularly known as Wadume.

Gov. Ishaku stated this while reacting to a claim made by Wadume that the Governor gave him N6million for the last elections.

Wadume also alleged that the APC gave him N13million ahead of the February 23 presidential election.

But in a statement on Sunday, Ishaku’s Senior Special Assistant on Media and Publicity, Bala Dan Abu refuted such claims, stressing that the Governor never met Wadume.

“The attention of His Excellency, Governor Darius Dickson Ishaku has been drawn to the claims by Hamisu Bala Wadume, a kidnap suspect current under arrest, to the effect that he dumped him(the Governor) of Six Million Naira during his inglorious reign as kidnapper.

“We wish to state categorically that Gov Ishaku was never a victim of Wadume’s duplicity and never lost money to his antics.

“We urge the general public to discard and disregard Wadume’s confessions on the alleged defrauding of Gov Ishaku as the rantings of a drowning criminal.

“Gov Ishaku has never met the kidnap suspect and would not even recognise him if they were to meet today.

“Governor Ishaku would like to use this opportunity to commend security agencies for promptly arresting Wadume who is the reason behind the dastardly murder of three police officers and one other person in Ibi earlier this month.

“He urged the security agencies to expand their dragnet to all the nooks and corners of Taraba State where the accomplices of Wadume and other criminal gangs may still be hiding to arrest them and bring them to book,” Abu said.