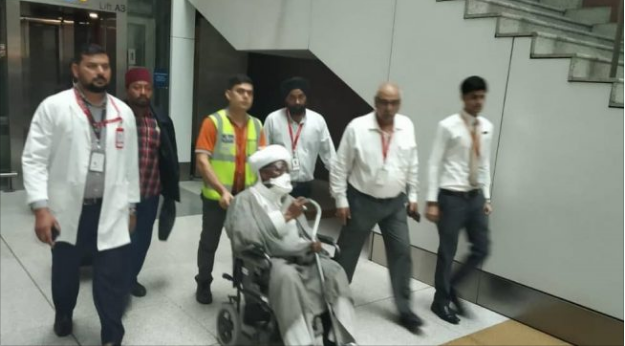 The Islamic Movement in Nigeria (IMN) has alleged that the federal government intended to kill Ibraheem El-Zakzaky in India ‘in the name of ‘medical treatment’.

El-Zakzaky was returned to the country after he refused to be treated by doctors provided by the government.

In a statement issued on Sunday, Ibrahim Musa, spokesman of the movement, said the Islamic cleric did not plan to seek asylum in India, contrary an allegation by the government.

He said the allegation was a campaign of calumny against El-Zakzaky by the government to hide its ‘’gross misconduct in a foreign land’’.

‘’The Islamic movement further accused the federal government of mischievously going beyond its role of supervision to the level of maliciously interfering in the medical process, instructing on which doctors the Sheikh and his wife must see, while refusing to allow them access to their own doctors, which confirms the allegation that the government had wanted to kill the Sheikh in the name of medical treatment, ‘’ he said.

“Before efforts at resolving this impasse could be concluded, the Sheikh was brought back to Nigeria, since their evil schemes could not be executed. The government is now churning out contradictory explanations to blame the Sheikh for not allowing himself to be killed in the name of medical treatment. The Nigerian government is also blackmailing the Sheikh that he sought for asylum in India just to cover their own gross misconduct in a foreign land.’’

Musa said El-Zakzaky was forced to either accept the choice of being treated by unknown doctors or to be returned home within two hours.

‘’Being mindful of the government’s various previous plots to eliminate him since 2015, first through the barrels of the gun and much later through poisoning in detention while refusing him access to adequate medical care until the court’s intervention, the Sheikh sensed the government’s intention of inducing killer doctors to finish what they had earlier started, now through the back door,” he said.

”He therefore insisted on having the presence of the doctors that initially assessed him in Nigeria, who also worked in that hospital, failing which, he preferred to return to Nigeria.

‘’It is rather very shameful and a slap in the face of Nigeria that the government which hitherto claimed it had no hand in the case, now has to resort to lies, calumny and blackmail against a couple whose alleged crimes has never ever been proved in any court of the land. All the allegations against this couple have always been merely spurious and unproven, and knowing that they could never prove in any court use the might of state power to intimidate and misinform the public.’’