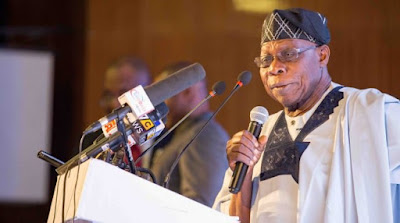 A cross-section of Nigerians has reacted to the N50m donation by former Vice President, Atiku Abubakar, to ex-president Olusegun Obasanjo’s library.

Atiku, in a statement issued by his media office on Monday, admitted that his son in-law, Babalele Abdullahi donated the sum of N50m to Obasanjo’s Presidential Library.

Atiku accused the President Muhammadu Buhari-led administration of desperately looking for ways to implicate ex-President Olusegun Obasanjo and silence him, adding that his son in-law made the contribution in full compliance with the law.

He also condemned the inclusion of Obasanjo’s name in the list of tax defaulters by the Federal Inland Revenue Service, FIRS, stressing that the move was to blackmail the former President.

Atiku’s confirmation has generated reactions on social media as some Nigerians queried the veracity of the reason for the donation.

@Surasheethe “The EFCC should be ashamed of sensationalism.how about the bullion vans at Election eve moving into Tinubu’s House? What is the worth of Yusuf Buhari’s motorbike? Atiku’s inlaw donated N50m to a good cause.how about Buhari’s inlaw Indimi who donated N4.8billion ($14m) to a USA university.”

@Johnfanimokun “The only difference between Atiku and the 77 Nigerian fraudsters is just that the former is supported and backed by State Power while the latter have no Power that can sheathe them.”

@IEkulide “Fundraising for Obasanjo library was done around 2005, EFCC was established by Obasanjo/Atiku Govt and Magu was foundation staff. All state govt, Parastatals, Private Companies, and private individuals. One wonders why EFCC is talking about 50m donation to presidential Library now.”

@Omgitseugene “The Atiku’s reclaiming of his stolen seems to be the only option for a viable Nigeria in times like this. There likely appears to be no headway for our democracy.”

@LawrenceOkorong “The way Atiku and his son-in-law are spending money if power is given to him won’t he sell the country and count his profit?

@Owhonda_henry “And that turned OBJ into a letter writer. We don’t know how much was used to buy off OBJ’s support. EFCC should dig deeper. More shits underneath. Thank God this man never won, they would have looted this country to stupor.”

@AkintundeBello3 “No wonder baba suddenly made a Volta’s face! I sensed it but had nothing concrete upon which I could establish my suspicion. But alas! It has been revealed.”

@Femiotuba1 “Everybody has his price, for Obj to forget everything he believes Atiku was in his book, I think Atiku pay more.”