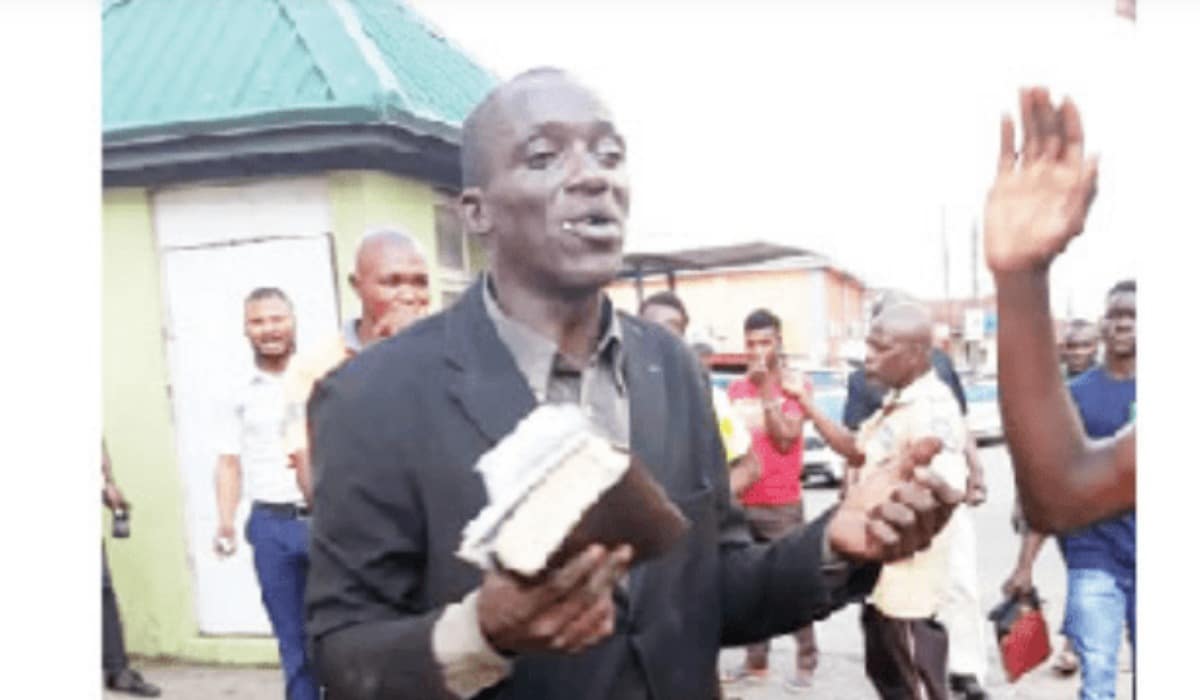 A 49-year old man, Mr. Akinjide Durojaiye, who claims to be an evangelist, was Thursday beaten to a pulp for allegedly stealing two new Techno mobile phones in Ibadan, the Oyo state capital.

The incident occurred in an office within Femi Johnson Building in Dugbe area of Ibadan.

Durojaiye, who claimed to be an evangelist with Dominion Assembly, Ilare-Ijesa in Osun State, said he was at the office where mobile phones and their accessories were being sold, to preach the gospel to the occupants of the office.

He further claimed that he came from Ilare-Ijesa on an evangelism mission to Ibadan, adding that it was the “spirit” which directed him to the office to preach to them.

However, it was gathered that the suspect was apprehended by the attendants and other onlookers at the office while trying to make away with the two packs of handsets worth N70,000.

One of the shop attendants, who simply gave his name as Tunde, said he did not notice when the evangelist pilfered the two phones which were on display for prospective buyers, saying that they were already carried away by his preaching.

While being chased by the people, Durojaiye was said to have hidden in a store within the office complex but was located by another attendant in one of offices after which he was brought out.

He was thereafter beaten after the phones have been recovered from him.

Durojaiye, when asked what led him to commit the crime, attributed the incident to the work of the devil, adding that it was his attempt to get money to treat his seven-year-old son, who was on admission at a hospital in Osun State, that pushed him into committing the act.

Durojaiye, a father of four, said that the son whom he gave his name as Oluwadurosinmi, jumped from a two-storey building in Ilare-Ijesa which, he said, led to his being hospitalised.

He further claimed that his wife had divorced him, thus leaving him to take care of the children alone.

The man was however released after thorough beating following the intervention of people within the neighbourhood who had thronged the scene of the incident.

Public Relations Officer of the state Police command, Mr. Olugbenga Fadeyi, when contacted, said that the case has not been brought to his attention.

Fadeyi, in a telephone conversation on Friday, pointed out that some of those incidents such as theft that are not serious matter, are not usually reported to the police.

“I am not aware of the incident. You know some of those incident that are not serious matters, people don’t even report it to the police. However, I will find out and get back to you,” he said.