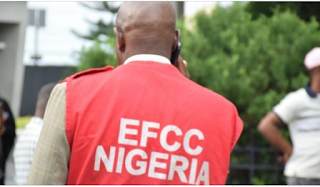 The Economic and Financial Crimes Commission (EFCC) has asked the 77 Nigerians indicted by the Federal Bureau of Investigation (FBI) for cyber crimes to submit themselves.

The Ibadan Zonal Head, Friday Ebelo said this on Wednesday during a press conference at its Iyaganku, Ibadan zonal office.

He also announced the arrest of one internet fraud kingpin, Ajayi Gbenga Festus, in Ekiti State. He was alleged to be working with other cybercriminals abroad in what he described as highly sophisticated web of a conspiracy designed to illegally access accounts of individuals and organisations to defraud them of their money.

He said Festus’ illicit transactions made through ti his Nigerian bank accounts amounting to N223million, noting that the suspects serve as a conduit pipe through which proceeds of crime reach members of the syndicate.

Ebelo said, “Nigerians are known to be creative, hardworking and intelligent. And this has been effectively proven by records of many groundbreaking achievements attributed to Nigerians within and outside the shores of the country. Many of these unusual feats were recorded in a foreign land, especially the United States of America and the Western world in general.

“Yet, we cannot pretend to be oblivious of the nagging impact of the illicit activities of the few who have chosen to be the black sheep within the fold. Despite their seemingly insignificant population, their acts often rare a thick pall of gloom whenever and wherever they gain ‘success’.

“But beyond the fuming anger and acute despondency that greet the development, our commission has rather seen a challenge that reinforces our resolve to never relent on our commitment to our constitutional mandate.

“As a responsible organization, the EFCC will do everything within its constitutional powers to ensure that interests of hardworking and law-abiding Nigerians are adequately protected, and that they are not denied the fruit of their labour by the recalcitrant few.

“We will also continue to work assiduously to ensure that those who engage in acts capable of tarnishing the good image of our country do not escape the cold hand of the law.

“To achieve this, the commission is in constant collaboration with international organisations with a similar mandate as ours, especially the FBI, in efforts to curb internet crimes and illicit funds transfer. Our longstanding collaborative engagement with the FBI and other law enforcement agencies remain intact and yielding mutual benefits.

“Our zone, in particular, has recorded huge success on account of this. This year alone, we have arrested a total of 263 suspects for cybercrime-related offences. 111 of them were convicted and sentenced to various jail terms.

“The zone has also recovered a huge sum of money in local and foreign currencies. We equally got the nod of the court to forfeit valuable items establish to have been benefits of internet-related crimes. These include landed properties, vehicles, laptops, phones and many others.”