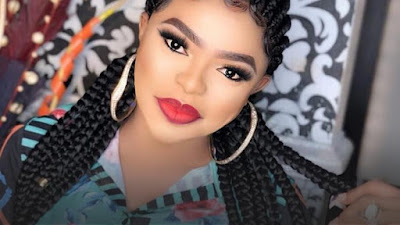 There is fresh trouble for controversial Nigerian cross-dresser Idris Okuneye, (Popularly knows as Bobrisky) as men of the Nigerian police force had invaded the venue of his 28th birthday party in Lekki, Lagos.

NigerianEye learnt that Police officers in various operational vehicles, stormed the venue and cordoned off the area on Sunday evening as the much talked about party was about to kick off.

This development comes two days after Bobrisky dragged Otunba Olusegun Runsewe, the Director-General of the National Council for Arts and Culture, who last week, said he is a National disgrace and will soon be dealt with by the government if caught on the street.


Honestly I was hoping Bobrisky won’t reply Runsewe but he did. You have bad mouth but do you have power!?
— 𝓖𝓸𝓽𝓽𝓲𝓼𝓫𝓾𝓻𝓰 🇳🇬 (@thatsgotti) August 31, 2019

So why did Naija Police shut down Bobrisky’s Birthday Party! Do they have any idea how much we’ve invested in this event?! #bobrisky pic.twitter.com/6WV5taelrK
— SammiAB (@callme_sammi) August 31, 2019


Bobrisky : “Ï heard someone in government talked about me a few days ago. Please tell him I’m waiting for him.
DG Runsewe: calls lagos CP “gimme 100 boys “
Bobrisky : 🙆🏿‍♀️🏃🏽‍♀️🏃🏽‍♂️

Bobrisky who turned 28 on Saturday had planned a birthday bash at the Pearls Gardens in Lekki Phase 1 on Saturday and another slated for Paradise Boat Club, Victoria Island on Sunday.

But Police Commissioner Zubairu Muazu ordered the deployment of water-tight security to ensure the party did not hold and also arrest Bobrisky, other cross dressers found.

NE gathered that five alleged members of Bobrisky’s club were arrested for breach of public peace and indecency and were currently in police custody.

According to the police, the government was not ready to allow continuous breach of existing laws, noting that allowing public display of actions that could corrupt young people was inimical to national consciousness.

A signal from the Lagos Police Command to Elemoro, Epe, Alausa and Victoria Island noted that the “popular celebrity and male barbie” was to celebrate his birthday at 10am at the Pearls Gardens in Lekki Phase 1 and thereafter host a party at Club DNA, 76 Adetokumbo Ademola Street, opposite Eko Hotel and Suite, Victoria Island by 10pm on Sunday.

It said a beach party was also scheduled for 10am on Sunday at Paradise Boat Club, plot 8, Walter Carrington Crescent, Victoria Island, directing the deployment of patrol vehicles and over 100 personnel to the venues to prevent any immoral act from taking place.

“Considering the pedigree of the celebrant, the event may likely cause breach of public peace and it is expected that no immoral display should be allowed.

“To augment security at each of the venues, ACPOL Area ‘A’ Lion Building/SUPOL Victoria Island is to mobilize 50 men from own Area Command/Division to provide security at Club DNA, 76 Adetokumbo Ademola Street, opposite Eko Hotel and Suite, Victoria Island and Paradise Boat Club, plot 8, Walter Carrington Crescent, Victoria Island on August 31 and September 1 respectively.

“Note, Area commanders/DPOs are to personally lead the men to the locations and ensure no immoral act should take place while the locations should be shut down if necessary. Ensure strict compliance please,” the signal read in part.

Confirming the arrest, Deputy Commissioner of Police (DCP) Mohammed Ali said Bobrisky was engaging in acts that were offensive to the generality of the populace, adding that some of his actions violated the Criminal and other laws of the land.

He warned that breach of public decency was an offence punishable under Nigeria’s law, warning that the command would not allow it’s jurisdiction to be used by anyone to propagate homosexuality.

Bobrisky had earlier boasted on social media of how he had spent millions of Naira to prepare for this event.