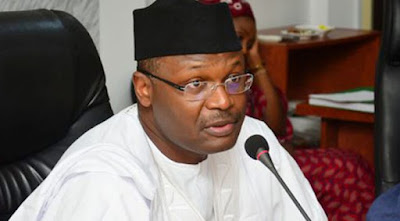 The party made the appeal in a statement issued by its National Publicity Secretary, Mr Kola Ologbondiyan, on Sunday in Abuja.

Ologbondiyan called on the National Assembly to open a public hearing on the issue.

He also urged the national legislators to effect amendments in the Electoral Act to check the appointment and retention of persons with political leanings as electoral officers as well as recommending stringent sanctions for infringements in that direction.


Ologbondiyan alleged that the manifestation of Briyai, as an All Progressives Congress (APC) governorship aspirant in Bayelsa while still in office, was a confirmation that he worked for the party in the last general elections.

“The party notes that Briyai’s governorship ambition on the platform of the APC, which he announced while still in the confines of his office as REC, amply exposed INEC as a partisan electoral umpire under the watch of Prof. Yakubu Manhood,” he said.

Ologbondiyan expressed worry that President Muhammadu Buhari was yet to sanction Briyai, even after announcing his ambition within INEC facility.

He called on the president to speak out on why he was yet to sanction the ex-Cross River REC in line with the law.

Briyai on Aug. 8, at a news conference within INEC office in Calabar, announced the resignation of his appointment with INEC to join the Bayelsa governorship race, on the platform of the APC.

Briyai, who served as Cross River REC from 2017 until his resignation, said he left his job to contest for the governorship of his state, following calls from the people for him to run in the Nov. 16 Governorship Election.

INEC in a statement issued by its National Commissioner and Chairman Information and Voter Education Committee, Mr Festus Okoye, said it was yet to receive Briyai’s resignation letter or aware that he had tendered his resignation to the appointing authority.

Okoye described the way Briyai made public his intention to join partisan politics as unacceptable and not in compliance with due process.

Okoye said that Briyai failed to follow laid down procedure for resignation, while it also frowned at the use of the commission’s premises to declare his partisan interest, saying it is unlawful.

The commission had withdrawn all power delegated to him as REC, while it also directed the Administrative Secretary of INEC Cross River to oversee the office and take over the functions and duties of the REC until further notice.