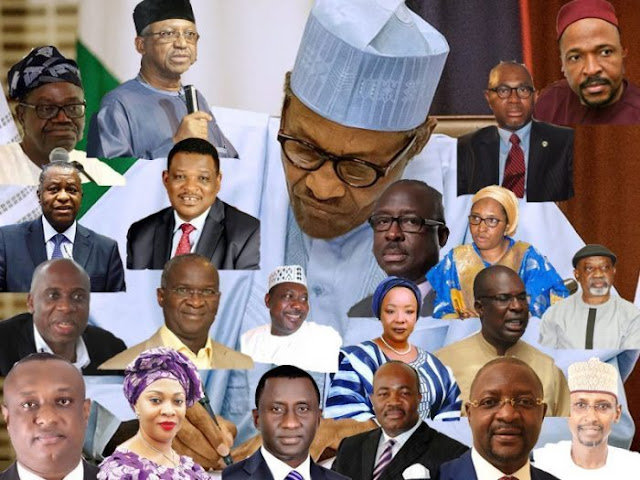 Nigeria's newly-sworn in ministers on Wednesday visited their various ministries, promising that they would work hard to ensure that the NEXT LEVEL agenda of President Muhammadu Buhari come into fruition.

The ministers, who were welcomed into the ministries with ovation, said they would strive to return the budget cycle to January to December.

I know little about my ministry - Aregbesola

However, the new Minister of Interior, Rauf Aregbesola, said he knew little about the operations of his ministry, adding that all he knew was what he read in the newspapers.

He said this when he visited the ministry shortly after he was inauguration alongside others by President Muhammadu Buhari in Abuja on Wednesday.

Aregbesola instructed the Permanent Secretary in the ministry, Georgina Ehuriah, to continue running the ministry until Monday when he would formally take over.

He assured the staff of the ministry and personnel of all paramilitary agencies under the ministry of purposeful leadership.

Ehuriah said the ministry needed “a focused person like you (minister)” to lead it on account of its strategic position in the security architecture of the country.

However, the Minister of Science and Technology, Dr Ognonnaya Onu, said the 2020 budget of the ministry would be ready by September in line with the presidential directive to return the budget to the January to December fiscal year cycle.

Onu said this when he was welcomed by the staff of the ministry on Wednesday.

According to him, the ministry will endeavour to get its budget estimates ready so as to have a hitch-free defence before the National Assembly.

“The budget for the ministry and agencies should be ready before two weeks. It is the most important priority for now,” he added.

He also said the ministry would channel its policies and programmes towards diversifying and growing the economy, as well as fighting corruption and insecurity.

Onu was returned as the Minister of Science and Technology, having served in the same capacity during President Buhari’s first term.

The Minister of Information and Culture, Lai Mohammed, on Wednesday assumed office with a charge to the directors to justify the confidence reposed in them by President Buhari.

Mohammed told the workers in the ministry to work hard in order to achieve the goal of leaving a lasting legacy.

The Permanent Secretary, Grace Gekpe, expressed happiness that Mohammed was back.

Also, the Niger Delta Affairs Minister, Godswill Akpabio, has assured President Buhari of the readiness of the ministry under his leadership and that of Festus Keyamo, SAN, to bring to fruition the dreams of the President for the Niger Delta people.

Akpabio, who stated this during a meeting with the management of the ministry shortly after his inauguration on Wednesday, said, “We have a very big task before us. The task is not insurmountable and we will surely deliver. We will put in our best to make you and Nigerians proud.”

Speaking later at the reception organised for the minister by the All Progressives Congress’ governorship candidate in Akwa Ibom State, Obong Nsima Ekere, thanked Buhari for the appointment.

I’m back to family, says Adamu

The returning Minister of Education, Adamu Adamu, on Wednesday said it took him more than a year to understand how the education ministry worked when he was first appointed in 2015.

Adamu spoke when he, in company with the Minister of State for Education, Emeka Nwajuiba, arrived at the education ministry and were welcomed by officials led by the Permanent Secretary, Sonny Echono.

Adamu said, “When we were sent here during our first tenure, it took me one and half years to understand the ministry; it also took me as a surprise when I was re-assigned to the Ministry of Education. I had thought I would be sent to another ministry where I would have to learn all over again. Now, I know that I am coming back to a family. You all are my teachers and hopefully we will work well together again.”

Also, the Minister of State, Nwajuiba, who is a former Chairman, Board of the Tertiary Education Trustfund, said, “I am comfortable that I do not have to go to another ministry but here with my senior brother at the ministry of education where I can be well directed.”

But the newly appointed ministers for the Ministry of Mines and Steel Development, Olamilekan Adegbite, and Uchechechukwu Ogah, resumed duties on Wednesday with a pledge to move the solid minerals sector forward.

In separate speech at a reception organised for them by the management staff and heads of agencies in the ministry, they declared their readiness to actualise the statutory mandate of the ministry.

The two ministers promised to deliver on the agenda to make the solid minerals and steel sector a major vehicle in the Federal Government’s economic diversification plan.

Earlier, the Permanent Secretary, Dr Abdulkadir Mu’azu, had expressed confidence in the ability of the new ministers to take the ministry to the next level.

‘Get budget ready by September’

However, the Minister of State for Budget and National Planning, Clement Agba, has pleaded with the workers of the ministry to ensure that the budget is ready by September.

Speaking at a reception organised for him by the members of staff of the ministry, Agba said the ministries had been given till September to send their budget to the National Assembly.

“Mr President had made it very clear to us, there is a whole lot of work to be done and he needs the budget to be before the National Assembly in September.

“That means for this ministry, in particular, we do have a lot of work to do. The only way we can succeed is for us to work together,” he said.

The Permanent Secretary, Mr Ernest Umakhihe, said the ministry helped to stabilise the Nigerian economy when it went into recession.

However, the Minister of Transportation, Rotimi Amaechi, on Wednesday said that he knew he would return to the federal cabinet following a hint from President Buhari.

He said this at a reception organised for him, where he also vowed to work hard to please his boss and Nigerians.

Amaechi said, “The President told me the same week cabinet was dissolved that, ‘I will return you to cabinet.’ So we knew that God would not allow enemies to have their way.”

The minister stated that the next thing to do was to make sure that he and his colleagues perform well in the ministry.

Also the new Minister of Health, Ehanire Osagie, on Wednesday stated that his administration would target expanded health coverage for all Nigerians through an improved Primary Health Care.

This was contained in a statement by the ministry’s Deputy Director, Media and Public Relations, Mrs Ogundoro Modupe.

She said the minister, who arrived at the ministry with the Minister of State for Health, Adeleke Mamora, promised that he would ensure that the agenda of the President for the health sector was actualised.

The new minister noted that his main vision for the sector would include growth of the Primary Health Care sector, improvement in the quality of medical care in hospitals and improving the indices in health security.

Mamora said the ministry would work in synergy with all relevant stakeholders to move the sector forward.

Some people did not want me – Pantami

However, the Minister of Communications, Isa Pantami, on Wednesday said some people in the telecommunications sector opposed his emergence as the minister for the sector.

Pantami was the Director-General of the National Information Technology Development Agency, a parastatal under the Ministry of Communications since 2016 and he was serving as head of the agency until his appointment as a minister.

He spoke when he was received by heads of agencies and departments in the ministry of communications shortly after the inauguration of the new ministers.

The minister, however, did not name those that opposed his appointment.

Noting that he was familiar with most of the officials in the ministry, as well as the heads of the agencies, Pantami stressed that hard work would be the only basis for any form of reward during his administration.

“We can interact as friends but what will elevate you is your hardwork – nothing else. The work must be done. We know the mandate of each and every agency under the ministry, the ministry also knows its own role,” he said.