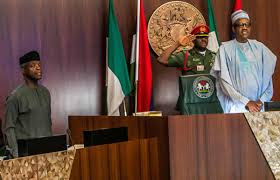 The meeting of the Federal Executive Council is not holding today due to the absence of President Muhammadu Buhari.

It would have been the first FEC meeting after Buhari inaugurated his cabinet for his second term on August 21.

However, it was said to have been put off owing to the President’s absence from the country.

The President jetted out of Nigeria to Japan on Sunday to attend the Seventh Tokyo International Conference on African Development (TICAD7).


“Being the first FEC meeting, ordinarily the President will like to preside over it to hear from the ministers on their first official engagements.

“Also, recall that upon inauguration last week, the ministers were given two weeks to complete the process of familiarising themselves with their ministries and to begin immediate work on the 2020 budget”, a Presidency source said.

Recall that during their inauguration, Buhari had also reminded the ministers that the FEC meeting would be held every week.

He stated,  “Dear honourable ministers, as you are aware, the Federal Executive Council Meeting is held on a weekly basis.

“As part of efforts towards ensuring effective delivery on our priorities, I have directed the Secretary to the Government of the Federation to track the progress against what we have committed to do to achieve these objectives.

“He is therefore expected to report the process of implementation and outcome to the Federal Executive Council.”

However, the first FEC, post-inauguration, did not take place on Wednesday.

Meanwhile, the Vice-President, Prof Yemi Osinbajo, presided over the Economic Management meeting, largely attended by heads of Ministries, Departments and Agencies dealing with the economy and the finances of the government.

The participants included the Minister of Finance / Budget/National Planning, Mrs Zainab Ahmed; Governor of the Central Bank of Nigeria, Mr Godwin Emefiele; Accountant-General of the Federation, Mr Ahmed Idris, among others.