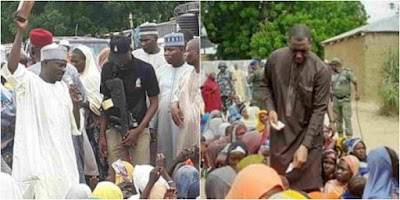 Addressing the IDPs in Monguno on Monday, where he was spending the second day to monitor the distribution of relief materials to about 200,000 displaced persons, Zulum raised the Qur’an calling on God’s wrath against anyone diverting the humanitarian assistance meant for the IDPs.

The oath was also administered against IDPs who have the habit of collecting multiple rations of food most of which they sell in markets, depriving fellow displaced persons of food.

The governor, who undertook the trip to Monguno on Sunday, where IDPs from Marte, Kukawa, Mobbar, Guzamala and Monguno Local Government Areas of the state are being accommodated, had at the weekend ordered the deployment of trailers loaded with varieties of food items including rice, spaghetti, oil and other condiments ahead of his visit.

Zulum, who had earlier ordered that a copy of the Qur’an be made available for the oath, had held series of meetings with officials involved in humanitarian activities and those of LGs whose ‎citizens were camped in Monguno.

The governor had at around 6:00 a.m. on Monday, toured the 16 camps in the town to ensure that genuine IDPs who spent the night in the camps benefited from the humanitarian supplies.

However, a mild drama was witnessed at the camps as hundreds of adult male and female IDPs began to leave queues whenever the oath administrator (acting as a town crier) raised the Qur’an calling on God to punish any one of them who was in the queue to collect multiple rations of food.

The oath administrator had said: “Listen to me very attentively, Governor Zulum has asked me to announce to you, that from himself as your Governor down to humanitarian officials of SEMA, NEMA, other government officials and anybody at all, whoever diverts food meant for IDPs, may the curse of God through the instrumentality of the Qur’an, come upon that person. May the wrath of God come upon anyone who has collected allocation ticket but came here to collect what is meant for others. You all know that food is distributed to households and everyone here is part of a household, if you know you are not the head of a household or that you have already collected your portion, better leave the queue or you incur the wrath of the Qur’an.”

Each time the oath administrator, simply known at Babagana, made the announcement in every one of the camps, IDPs left in their numbers with some of them laughing.