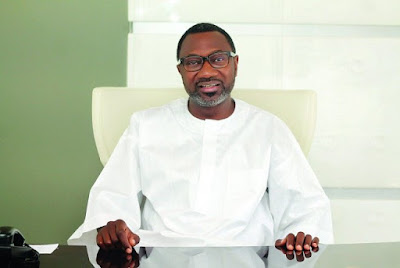 Femi Otedola, billionaire business mogul, has offered to sponsor the education of a young Nigerian girl after he spotted her dancing to ‘Gelato’, his daughter’s recently released single.

The song scaled up to number 3 on the Apple Music chart within a day of release; caused a frenzy among Nigerians on social media; and topped playlist in clubs, radio stations, and occasions across the country.

On Sunday, the business tycoon took to his Instagram handle to share a video of the little girl dancing and then told his daughter to find her so he can fulfill his promise of providing “her scholarship from now through university”.

“My daughter, can you find this girl? I will provide her scholarship from now through university,” he captioned the post.

In the video (above), the little girl is seen wearing a headset and hitting the bars of a black piano while occasionally screaming ‘Otedola’ and dancing to the beats of the song.

This is not the first time he will be making such pledge. In 2018, Otedola had promised to sponsor the education of Megabyte, an 11-year-old rapper.

The renowned philanthropist has severally made the headlines on account of his penchant for doling out funds to both individuals and groups.

He has also constantly proven to be a man of his word and this was evident when he assisted Christian Chukwu, former coach of the Super Eagles, who was in need of medical attention.

In July, at the 2019 Africa Cup of Nations (AFCON), he also fulfilled his pledge to give the sum of $25,000 for each goal scored by the Eagles during the tournament.

The 56-year-old former Forte Oil CEO recently promised to take care of the medical expenses of Sadiq Daba, an ailing Nollywood actor, who has been battling leukemia and prostate cancer.