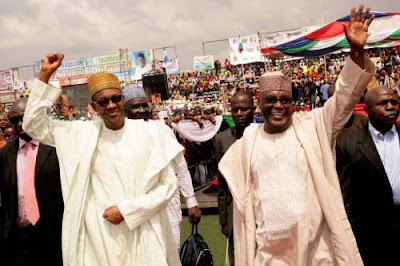 The National Working Committee, NWC, of the Peoples Democratic Party, PDP, has lambasted the All Progressives Congress, APC, for “warning” its 2019 presidential candidate, Alhaji Atiku Abubakar against making comments on the state of the nation.

APC had said Atiku’s comments on the state of the nation amounted to felony.

APC spokesman, Lanre Issa-Onilu, in a statement Tuesday night, said Atiku was in the habit of issuing statement on matters “which constitutionally should be reserved for the duly elected head of government”.

However, PDP stated that Atiku’s comments on national issues have been patriotic and within his constitutional right of freedom of speech.


A statement by PDP’s spokesperson, Kola Ologbondiyan said Atiku was entitled to comment on national issues not only as a “citizen of Nigeria but also a former Vice President, as well as a leader and Presidential candidate of the PDP, the party that commands the followership and solidarity of overwhelming majority of Nigerians.”

The former ruling party maintained that Atiku’s comments on national issues don’t “fall within the realm of felony.”

“As a responsible political party, we boldly state that none of the statements made by our presidential candidate falls within the realm of felony in anyway whatsoever.

“Moreover, the APC is reminded that while the PDP was in power, it never gagged the APC and its leaders, including President Buhari, from exercising their freedom of speech and freedom after speech, in line with our laws.

“We note that General Muhammadu Buhari issued over 160 statements while he was in the opposition, including inflammatory remarks like the one that called on his supporters to take their fate in their own hands. It
is instructive to note that none of the PDP administrations threatened General Buhari over such comments.

“Furthermore, it is quite disturbing that the APC is attacking Atiku Abubakar for commending British Prime Minister, Boris Johnson, for appointing 39 years old Nigerian, Kemi Badenoch, as a minister in his cabinet.

“Contrary to President Buhari’s projection to the world that Nigerian youths are lazy and should not be given active role in governance in our country, other nations are finding accommodation for our youths. Atiku Abubakar cannot but commend such world leaders, no matter whose ox is gored.

“It is also instructive to note that the APC has further shown its disdain for the Nigerian youth as being demonstrated by President Buhari, whose cabinet has no place for our youths.

“Instead of attacking Atiku Abubakar for standing for our energetic and focused young men and women, the expectation of Nigerians is that APC will accept its failures and advise President Buhari against total disregard for young Nigerians.

“Furthermore, the PDP notes the reference by APC to President Buhari as a “sitting” President. Our party, however, states that what Nigeria needs at a time like this is a working President, not a President that sits down while our country becomes the world headquarters of poverty; not a President that relaxes in an arm-chair while insecurity festers and our economy continues to nosedive to the extent that Ghana has overtaken our nation as the number one recipient for Foreign Direct Investment (FDI) in West Africa.

“This is why the PDP stands with Nigerians in their determination to retrieve Atiku Abubakar’s stolen mandate at the tribunal and no amount of threats by the APC can detract from this resolve,” the party said.