2023: Signals of rapid decline of the Asiwaju 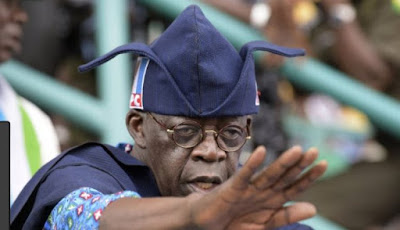 When a man adjudged to be a demi God gets to the peak of his chosen carreer definitely the law of diminishing returns sets in.

The Asiwaju  Oba of Lagos, Senator Bola Tinubu is one man rapidly heading towards the direction of the law  of diminishing returns.

Going by reports from different quarters across the country, the All Progressives Congress, APC leader may soon start a massive media campaign on his ambition to lead Nigeria.

The latest indication is his appointment of Sen Shehu Sani to manage the North West zone of the country for him.

Those ministers were not appointed by error and his choice of a political neophyte like Sani too can’t see his dreams going beyond Kaduna.

Once the North West collapses, the North East definitely will not endorse the Asiwaju and the North Central will follow suit.

So will the South West alone see him through as both the South East and South South will give the Asiwaju raw pepper to chew.

They will not be in a hurry to forget about the role he played in the political history of Nigeria between 2011 and 2019.

This will go a long way in proving to him that the people of both regions are not the forgetful lot as they will make sure he scores zero votes in all polling booths.

It may sound alarming but town criers will come out  in different Hamlets to announce why a man who through his leadership of a party rendered them useless should not be voted for.

They will name all he has done and collectively agree that whoever votes for the Asiwaju should be exiled.

This should not be a surprise to him because while he reigns and still reigning people from both zones saw through him.

How he planted men to fabricate lies against Goodluck Jonathan their son all in a bid to rubbish him but today the man sleeps peacefully because he refused to step on toes.

But the Asiwaju has a lot to think of because stepping on toes is his passion.

A man so passionate over stepping on toes and doing it as if nothing happened has a lot of questions to answer in 2023.

Firstly, he needs to explain to Lagosians why he felt Ambode that he removed as governor was a better administrator than a politician.

Secondly, Lagosians particularly the non-indigenes are fast losing confidence in the person of the Asiwaju that they once strongly believe in.

Thirdly, his political eclipse in Lagos is iminent and in the entire South West he should expect a rude shock in 2023.

So where is he expecting his votes from in 2023 when all the zones that he is toying with for now may not vote him into power.

Yes! The media in Nigeria is in his pocket of course and  that’s a big plus but how long will the media continue to take the bait?

Asiwaju, Adams Oshiomhole are media creations making sway in the Nigerian political landscape for now but 2023 or before then their ecplise is looming and only re-engineered political manouvres  can bring both men back to reckoning.

But both men should count the South East and South South zones out of any of their political permutations.

The law of diminishing returns is fast enveloping the Asiwaju.