US ambassador asks FG to get rid of fuel subsidy 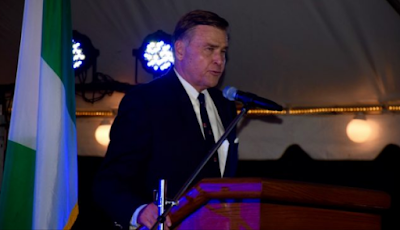 Stuart Symington, US ambassador to Nigeria, has advised the federal government to get rid of fuel subsidy.

The advice is coming a week after Muhammad Sanusi, emir of Kano, said heavy subsidy is leading Nigeria into bankruptcy.

Wale Tinubu, managing director of Oando Plc,  had also called on the government to cease subsidy.

Speaking during an event to commemorate America’s 243rd independence, Symington said subsidy costs Nigerians “more than they worth”.


The US diplomat added that Nigeria needs to empower and educate its female population.

“You don’t need anybody to tell you what to do. It is very simple. Number one,  don’t look to government and get rid of gasoline subsidies. They cost every Nigerian citizen more than they worth,” he said.

“Number two, educate and empower every girl and every woman so that Nigeria sees her future with two eyes and can grab it with two arms and not one.

“Number three, give power to the people. Put an electricity meter in every home and pay for what you get and tell the companies that you’re paying for what they deliver. But Nigeria knows all that and one other thing, that tonight and every other night, that every Nigerian is both a citizen and a subject. In Nigeria, there is one government but there are hundreds of servants.

“A great asset of Nigeria is for all those who lead and all the subjects they represent, to come together to make this nation one nation bound in freedom with peace and unity and in this process, you can count on the US for we believe in your ideas and we profoundly believe in you.”

He said the Nigerian idea of people with 497 different languages living together is what the US has been trying to achieve since its independence.

“It is an idea that people who speak 497 different languages, that is twice as many languages that are spoken on any given day in the United Nations, 497 different tongues coming together, Nigeria is the idea.

This, by the way,  for 243 years, it has been the dream of the united States to take people separated and divided in colonies with different rulers and bring them together as a nation with one governor. The Nigerian idea is an idea that is absolutely truly shared by the US.”