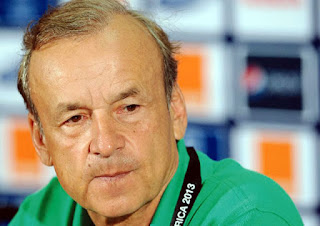 Super Eagles coach Gernot Rohr says “there’s no shame” losing to Madagascar after his highly-rated side crashed 2-0 to Madagascar in their final group B game on Sunday at the Africa Cup of Nations ongoing in Egypt.

Rohr’s wife is from the Indian Ocean Island.

A goal from LalainaNomenjanahary and a deflected free-kick from Carolus Andriamahitsinoro saw debutants Madagascar finish as Group B winners and Rohr admits his side were poor and complacent.


The defeat was the Eagles’ first at the tournament in Egypt and their 20th in 89 AFCON games.

“We lost to a good team because Madagascar was the first to qualify for the tournament and there is no shame in losing to such a team,” Rohr said in his pre-match conference.

“Madagascar was the better team today (Sunday). We started with giving them (Madagascar) a gift and after, we could not find a solution.

“We made five changes because we wanted to give rest to some players and also preserve those with cards. Sometimes it happens when you are already qualified; the players are relaxed and playing easy.

“I wanted to see other players which was why I made five changes and that was perhaps why we were dominated by Madagascar. We have to work hard for the next match because that is more important.

“It’s normal to change the team when one has already qualified. I wanted to rest the team and give others the opportunity to play.

“We misplaced simple passes and were poor perhaps because subconsciously we already were thinking about the next round. We have to do better in our next game.

He believes the Barea stands a good chance of winning the AFCON but adds that he will rather focus more on his team who may face Ghana in the round of 16.

“They (Madagascar) can do it but I have to focus on my team so that we can do better.

“I’m still confident that we can win the tournament because we have our injured players back. Ighalo and Musa completed 90 minutes which should help our rhythm in attack. Also our left-back Collins is back so we have a fit again squad.”

The German also explained why the duo Victor Osimhen and Henry Onyekuru are yet to feature at the tournament.

“We had to see other players. We wanted to see the Ikechukwu Ezenwa, John Ogu and also Kalu after his health scare. We cannot change 11 players and the team is also decided by the attitude of players in training which shows who is ready or not.

On his team’s chances in the round of 16, Rohr said,”We can play a good team regardless of where we finish. We will analyse our future opponents when we know them.