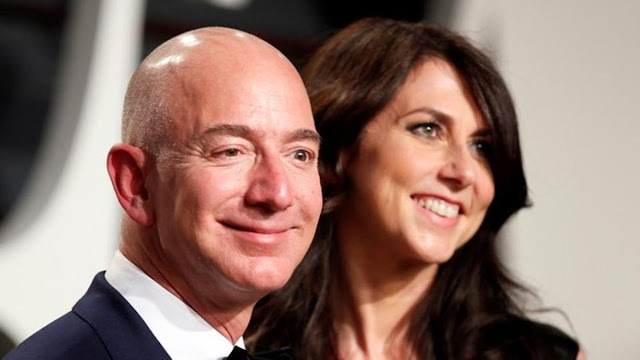 MacKenzie, the ex wife of the world's richest man, Jeff Bezos, is now the 22nd richest person in the world after her huge divorce settlement and has promised to donate half of it to charity.

Under the agreement, MacKenzie, 49, will receive 4% stake in Amazon.com shares and its valued at $38.3 billion, while Jeff, 55, will retain a 12% stake and remain the world's richest man with a net worth of $121 billion.

Before the split, the Bezos couple was married for 25 years and have four children. The union collapsed after news emerged, in January, 2019, that Jeff had been allegedly cheating on his wife with former television anchor, Lauren Sanchez.


A King County, Washington judge on Friday signed an order formalizing the separation. That sets the stage for the transfer of some 19.7 million shares of Amazon.com Inc. to MacKenzie’s name. The Bezoses announced the split in January.

That 4% holding is valued at $38.3 billion, enough to place her 22nd on the Bloomberg Billionaires Index, a ranking of the world’s 500 richest people. Her former husband, the founder and chief executive officer of the world’s largest online retailer and web-services company, retains a 12% stake worth $114.8 billion and remains the world’s wealthiest person.

The court papers formalizing the divorce revealed little else about the terms of the separation. The couple filed a parenting plan for their children earlier this week. MacKenzie Bezos, a 49-year-old novelist, said in an April tweet that she gave Jeff Bezos, 55, all of her interests in the Washington Post and space-exploration company Blue Origin.


She also signed the Giving Pledge in May, promising to donate more than half of her fortune to philanthropy.

“I won’t wait," she wrote in her pledge. “And I will keep at it until the safe is empty."

Jeff Bezos, 55, remains the world’s richest person, with a 12% Amazon stake worth $112 billion, according to the Bloomberg Billionaires Index. He’ll retain other assets, including the Washington Post and space-exploration company Blue Origin, MacKenzie Bezos, 49, said in an April tweet.

The amounts involved are unprecedented. While Oracle Corp.’s Larry Ellison has been through multiple divorces, none has affected his stake in the software maker. Likewise, Google co-founder Sergey Brin’s stake remained unchanged after he and Anne Wojcicki divorced without fanfare in 2015.

Oil industry magnate Harold Hamm’s separation from Sue Ann Arnall was far messier. The couple filed for divorce in 2012 after 26 years of marriage, and their trial two years later ended with Hamm, the chairman and CEO of Continental Resources Inc., being ordered to pay her $972 million of his then-estimated $16.1 billion fortune. Arnall later sought to reopen the case but the Oklahoma Supreme Court dismissed the appeal in 2015.

The divorce petition identifies Bellevue, Washington-based Ted Billbe as her lawyer. Seattle’s Sherri Anderson is the attorney for Jeff Bezos.