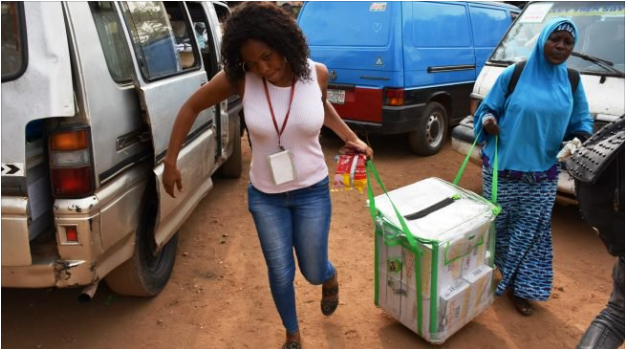 The Nigeria Civil Society Situation Room has released a damning report on the 2019 general election which it says failed to meet the “threshold for a credible election”.

The presidential, governorship and legislative polls were held in February and March, with President Muhammadu Buhari of the All Progressives Congress (APC) getting re-elected for another four years and his party winning majorities in the two chambers of the national assembly.

The Situation Room, made up of 63 civil society organisations that monitored the general election across the country, highlighted a number of lapses which it said undermined the credibility of the elections and pose “serious questions about the future of elections in Nigeria and quality of democracy in Nigeria”.

It said before the elections, it had issued a Threshold Document for a Credible Election “which stipulated minimum requirements for credible elections in 2019, drawing from local and international frameworks”.

“These standards were grouped under obligations to be fulfilled by the Independent National Electoral Commission (INEC), the political parties, the security agencies and other state institutions. From the lapses noted during the observation of the 2019 general elections, it is the conclusion of the Situation Room that the elections failed to meet the threshold for a credible election,” the report said.

INEC, the electoral umpire, came under criticism for “falling short”.

According to the report, which was issued on Tuesday, “INEC operations fell short of its identified role and obligations in the Threshold Document. Logistical and operational challenges marred the credible conduct of the elections. The first sign of this flaw manifested with the shock and unexpected postponement of the elections in the early hours of the very day they were to begin, on Saturday, February 16, 2019.

“Postponing voting about six hours to the start of polls did more than expose how ill-prepared INEC was, it also dampened the nationwide enthusiasm that had built up for the elections. It made it impossible for many who had travelled earlier to vote in their constituencies to make a second trip, exacerbating voter apathy.

“The collation of results, another major weakness of Nigerian elections, remained a concern throughout the elections, with observers reporting interference with the process, especially by political parties and security agencies oftentimes with the active participation of INEC officials. Data in the voters’ register as well as results figures declared by INEC threw up several glaring discrepancies that have yet to be explained.

The Situation Room, which partnered with TheCable for the coverage of the elections, said the lapses could have been avoided if the electoral act amendment passed by the national assembly had been signed into law “and put into use”.


The report said the election day was characterised by localised incidents of voter intimidation, ballot box snatching and destruction, and general voter apathy as the national voter turnout rate dipped from 43.7 per cent in 2015 to just 35.6 per cent.

“Though not directly a responsibility of INEC, the inability of INEC to speak out in real time about these challenges and indiscriminate cancellation of election returns without clear explanation called into question INEC’s good faith.  It is worth noting that since 2003, voter turnout has progressively decreased in each electoral cycle. This is a concern given the increase in the number of political parties to 91, the increase in voter registration (from 68,833,476 to 84,004,084), and rise in permanent voter card (PVC) collection rates (from 82.03% to 86.63%) between 2015 and 2019,” it said.

The report condemned the militarisation of the elections.

“The Situation Room observers noted military involvement in the elections outside of the limits allowed by law.  The Electoral Act specifically states that military involvement in the elections shall only be at the request of INEC and only for the purpose of securing the distribution and delivery of election materials and protection of election officials. The Threshold Document called for a security deployment that was under the operational control of INEC in accordance with the provisions of the Electoral Act,” it said.

“In apparent contravention of this, troops were deployed nationwide during the elections, without any clear coordination with INEC and with President Buhari warning that people who would attempt to snatch ballot boxes risked paying with their lives, a statement the army chief said he would heed. In places like Rivers state, the military posed significant challenges and obstructions to the performance of election duties by INEC officials. Situation Room received reports of incidents of partisan involvement in the elections by the military, particularly in Rivers state.”

The European Union Election Observation Mission to Nigeria released its final report in June and concluded that INEC’s neutrality was questionable while highlighting some progress recorded by Nigeria in the general election.