BBNaija: Omashola, Khafi, Avala, two others up for eviction 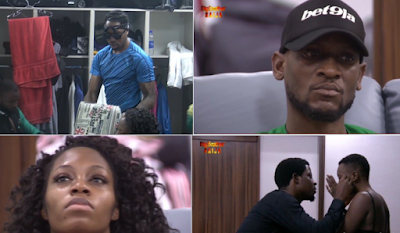 Addressing the housemates on Sunday morning, Big Brother said, “The following housemates should immediately proceed to pack their bags and put them in the storerooms, Avala, Gideoni, Khafi, Isilomo – you have one hour to do this.”

The housemates selected for eviction were the ones with the least amount of bet9jaig coins.


Following the loss of his Bet9ja coins, housemate, Omashola’s chances of getting evicted during the Sunday live show have increased.

The ‘Pepper Dem’ housemates were given coins and that ‘Biggie’ had stated that the housemate with the least number of coins would be evicted during the live show on Monday.

Omashola, who had 120 coins, was clearly distraught upon discovering that at least 100 of the coins were stolen from the bunch after the Saturday party.

According to the 38-year-old housemate, he kept the coins in his Bible before the party and could not account for how they got missing.

The Delta-born Omashola poured his aggression on other housemates, urging Biggie to replay the tape and stating that he would not leave the house if evicted.

He also asked the housemate, who might have stolen the coins to return them as he could do anything to retrieve them.

Meanwhile, another housemate, Mike Edward has offered to give Omashola his coins, thereby risking eviction himself.

The other housemates, who were still basking in an after-party high, tried to comfort Omashola while he went on about what the show meant to him.

Fans of the show have taken to social media to show support for Omashola, pleading with Biggie not to send him home as the coin loss was not his fault.

@Tunyere said, “They should return his coin! Now the house is in rampage! Even isilomo is crying #bbnaija #returnomasholascoin.”

@Rovy said, “Omashola is just eyeing all the housemates. He said they should all pack their bags cuz everyone will be going back to their house tomorrow, they are all leaving Biggie’s house. #BBNaija.”