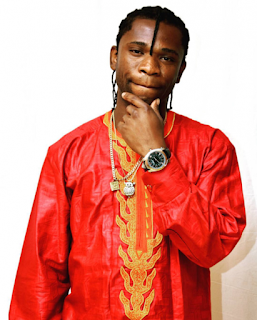 Controversial US-based Nigerian rapper Speed Darlington, has called out Nigerian music bloggers: owners of NotJustOK and Naijaloaded for offering his song for free download on their platforms.

Expressing his anger, Speed, wishes death on the music platforms and the owners for uploading his songs latest release Akamu.

Speed Darlington, while promoting his song Akamu (PAP) said PAP actually connotes his political party as he claims he is aspiring to become Nigeria’s next president in the year 2023.

In his post, he mentioned that if the song goes viral and he makes enough money from it, he will have the required funds to run for the Presidency and promised all African-Americans in the United States of America free Nigerian citizenship if he emerges the President of Nigeria.

In another news, Speed Darlington, while reacting to photos of Nollywood actress, Destiny Etiko, asked if her butts are real or fake

The curvy Nollywood actress posted pictures of herself flaunting her backside and this elicited a reaction from the rapper.

Is that a real ass or fake ass? I can’t tell because the way Nigerian girls is rushing fake a.ss you will think they from Dominican Republic