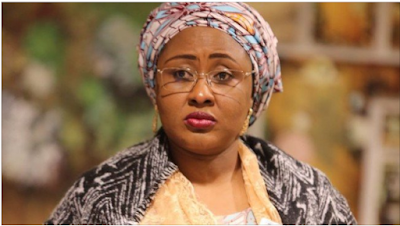 Buhari who was represented by Mrs Pauline Tallen, Former Deputy Governor, of Plateau, made the call at a two-day National Conference on Women’s political Participation in Nigeria: Post-2019 General Elections.

She commended women who made an attempt to contest in the last elections although most of them were denied against the wishes of the electorate.

“It is a sad situation, it is heart breaking, but we must learn to do thing differently; its high time we reduced the talking and moved into action.

“It is time for action and we are calling with a big and loud voice to all our political parties and INEC chairman to do what their counterparts are doing in other countries by promoting women.

“We have very capably women that can contest any position in Nigeria; we are in a man’s world we can only succeed if we have the support of the men.”

Buhari said that on her part, she was persisting on the president to do something different by giving women a quota system just like in other climes.

She said that was how other women were succeeding in other countries adding that an amendment of the electoral law would also give women an edge.

She said that statistics on women participation in politics in Nigeria was heartbreaking adding that “we must rethink and do everything possible that will earn us the name of being the giant of Africa.”

Earlier, Mrs Ebere Ifendu, President, Women in Politics said that a record of 2,970 women contested elections into different positions in the 2019 general elections but only 67 got elected across the nation.

Ifendu said that a breakdown of the elected members show that no women was elected as president, vice president or governor while only seven were elected to the senate.

She said that 12 were elected to the House of Representatives and 44 to the State Assemblies with about 11 states without a female member.

She said that Nigerian women went to the elections with high expectations but the overall level of representation of women in politics remained a cause for concern as the number elected continued to dwindle.

Ms Comfort Lamptey, UN Women Representative to Nigeria and ECOWAS said the conference was aimed at examining the 2019 elections in terms of women’s participation.

Lamptey said the conference would also look at the lessons learnt from the 2019 elections, approaches adopted by stakeholders to support women and outline an action plan for a robust engagement ahead of 2023.

She said that UNwomen would continue to support Nigeria to expand the political space for women because it was necessary to ensure attainment of the Sustainable Development Goals (SDG) and build inclusive and lasting democracy.

Dr Hadiza Balarabe, Deputy Governor Kaduna state, urged women not to give up but support each other by being their ‘sisters’ keeper to win elections.

Balarabe also urged them to build their capacity in politics and all other walks of life because it would help them greatly as in other smaller countries women were doing well.

Said she: “Nigeria must do it; other smaller countries should learn from us and us from them.”

The conference was organised with support from UNwomen, the European Centre for Electoral Support (ECES) Centre for Democracy and Development (CDD), Nigeria Women’s Trust Fund and Women in Politics.