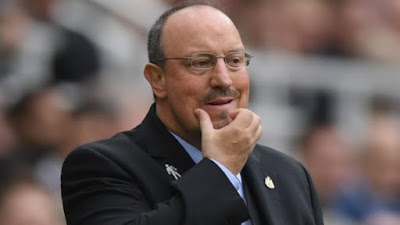 Rafael Benitez will leave Newcastle United after three years as manager when his contract expires next week, the Premier League club confirmed on Monday.

“It is with disappointment that we announce manager Rafael Benitez will leave Newcastle United upon the expiry of his contract on 30th June 2019,” Newcastle said in a statement.

Despite failing to keep Newcastle in the top flight shortly after taking over, Benitez earned hero status on Tyneside as he led Newcastle back to the Premier League at the first time of asking and then stabilised the club by finishing 10th and 13th in the last two seasons.

However, the Spaniard did not hide his displeasure at the lack of backing he was afforded by Newcastle owner Mike Ashley and was believed to be seeking assurances over the budget he would have to work with before committing his future to the club.


“We have worked hard to extend Rafa’s contract over a significant period of time, however, it has not been – and will not be – possible to reach an agreement with Rafa and his representatives,” continued Newcastle’s statement.

“We would like to thank Rafa and his coaching team for their efforts over the last three years and their significant contribution to what has been collectively achieved.”

Benitez, who won the Champions League when in charge of Liverpool in 2005, has been reportedly offered a contract worth £12 million-a-year at Chinese club Dalian Yifang.