PREVIEW: Madagascar or Nigeria? Who tops group B? 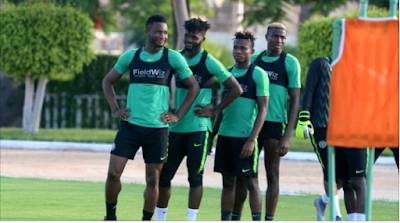 Nigeria face Madagascar on Sunday evening in a crucial game which will decide who comes out on top in 2019 Africa Cup of Nations (AFCON) Group B.

With two wins, Nigeria start the game on six points. Gernot Rohr’s side only need a draw to seal top spot. Madagascar have one win, and a draw, keeping them at four points. They need a win today to top the group.

Sealing first place is crucial as it will probably see Nigeria avoid a meeting with Ghana or Cameroon in the next round, and face either Kenya or South Africa for a place in the quarter finals.

The three-time AFCON winners started the 2019 tourney with a 1-0 win over Burundi thanks to Odion Ighalo’s second half effort.

Rohr’s side failed to find the back of the net in the opening forty-five minutes and had to wait twenty minutes after the restart to finally break the deadlock against Guinea.

Kenneth Omeruo soared the highest to meet Moses Simon’s delivery from the corner and guided the ball into the net with his head, to beat Ibrahima Kone at his far post.

The squad finished the match with ten attempts at goal and restricted their opponents from taking more than eight shots of their own.

Madagascar have been a joy to watch so far this AFCON with their quick counter attacking style proving very effective against Guinea and Burundi.

They line up in a 4-2-3-1 like Nigeria, with Marco Ilaimaharitra, Anicet Andrianantenaina and Charles Carolus Andriamahitsinoro the danger men up front.

The Barea, making their first appearance in the tournament finals, drew their opening match 2-2 against Guinea and pipped Madagascar 1-0 thanks to Ilaomaharita’s stunning free kick.

With Nigeria so focused on attacking, Madagascar will potentially sit back and soak up the pressure before looking to Ilaimaharitra to make runs behind the Super Eagles defence, and punish them on the counter. This plan worked against Burundi, and Dupuis will hope it has the same effect with Nigeria.

Nigeria have played well in the tournament so far, and they will hope to give themselves the best chance of progressing as far as the quarter-finals by beating Madagascar on Sunday.

The South Africans may prove to be the toughest opponent the Eagles have faced so far, but if the defence is tight, and if Moses Simon can get a run at the Madagascar goal, then Nigeria can come out with a win.