Oyegun bitter over removal as Chairman, Shuaibu a mole – APC 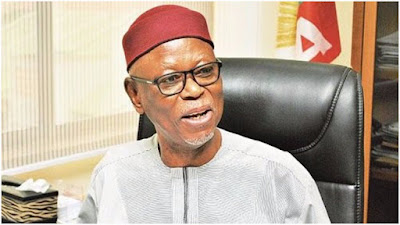 Oyegun had criticised Oshiomhole’s stewardship in the APC, saying he runs the party in an ‘Agbero’ style.

However, in a statement, Wambi said Oyegun’s scathing remarks was borne out of malice and grudges over his removal from the leadership of the ruling party.

Wambi also accused the party’s Deputy National Chairman (North), Senator Lawan Shuaibu, of being a mole of the Peoples Democratic Party (PDP), accusing him of leaking information to the opposition.

He denied that there was any crisis in the party even with the disagreement among some of its leaders over the outcome of the 2019 general election.

“As far as I am concerned, all of us belong to the same political party called the APC. We were all elected and given the same mandate to strategise and strengthen the party. Maybe we can call it ideological and personal differences, but as for the party, we don’t see it as crisis.

“Shuaibu expressed his personal opinion enshrined in his fundamental rights, but he got it wrong blanketing the entire NWC and the party in general with such allegations. If he has any score to settle with the National Chairman, it should have been personal.

“Without pre-empting the report of the disciplinary committee we set up to try him irrespective of whether he appeared or not, decision will be taken against him. He even said that we don’t have the mandate to try him, forgetting that anybody could be investigated if the need arises.

“He refused to exhaust all the party’s internal resolution mechanism before taking our party to the market. To add salt to injury, he decided to release that bombshell on the day of inauguration of our President. That alone was enough to attract punishment.

“There may not be anything wrong with his action, but the timing, the mischief in the content and his refusal to exploit the internal resolution mechanisms. We will certainly come very hard on him.

“I tell you what; Shuaibu caused most of our problems. Outsiders blame Oshiomhole, but they did not know that Shuaibu was our biggest problem. Before we could finish our meetings, the PDP will be in the custody of our discussion.

“Before we finish our meetings, everybody is aware of our decision. How can you build a united party with a mole like Shuaibu in the house? But God has already exposed him and all his misdeeds will be further exposed in the disciplinary committee’s report,” he said.

The APC national vice chairman stated that Oyegun is still bitter over his exit from the ruling party.

“Again, the allegations Oyegun raised against Oshiomhole are also his personal opinion. Oyegun is still feeling aggrieved because he was rejected. Oshiomhole is a much more prepared person than him. He is just nursing grudges against Oshiomhole and no matter what happened, he will not like Oshiomhole.

“As far as we are concerned, the party is in good hands. Oshiomhole is focused, vibrant and committed to the wellbeing of this party. People may not like his style, but if not for his dynamic leadership style and calibre, the PDP would have crushed the APC during the 2019 presidential election. He has the interest of the party at heart,” he insisted.