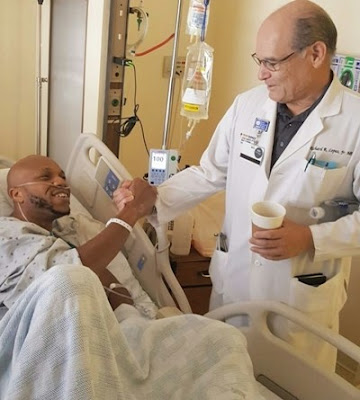 Nollywood actor Charles Okocha a.k.a. Igwe Tupac has expressed gratitude to God after undergoing a successful emergency surgery in the United State of America.

The comic actor, who took to his Instagram handle @charles_okocha to express his gratitude to God and level of excitement, also urged people to get close to God.

“Thank God for a successful medical surgery, I went for a 5 days Vacation trip to California with my son.

“This is where I ended up my Vacation We all should all get close to God-Man propose God disposes.

“Tomorrow cannot promise you, never know what next. Am fine now God is the greatest #nunugang,” he wrote.

The actor shared photos from his hospital bed where he was recuperating on Monday June 24 on his Instagram page.

According to him, he is thankful to God for safe operation even though the initial plan was a vacation trip in the United States.

In 2016, after being hit by a stray bullet, Okocha had revealed how he survived a near-death experience which left fans and admirers in total shock.

The actor has contributed immensely to the growth and development of the entertainment industry by featuring in numerous Nollywood movies.

He has won many awards which include the Nigerian Entertainment Award for the best Comic Act (online).