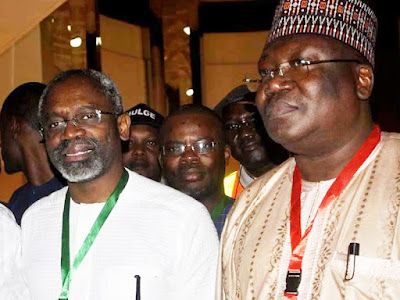 Baru spoke through a statement signed by its spokesman, Mr Ndu Ughamadu, in Abuja, on Thursday.

He said that the Oil and Gas Industry would count on their enormous support to move the sector forward.

He expressed heartfelt joy in their elections into the nation’s hallow, chambers, adding that he hope that the 9th National Assembly would work in harmony with other arms of government for the development of the country, NAN reports.

To the Senate President, Lawan, he said, “At this critical period in our Country’s history, Nigeria deserves a President of the Senate that has enormous wealth of experience, of which, luckily, you embodied and are endowed with, making you a rare blessing to the nation’s body polity in dare need of strong, committed and purposeful leadership.

“I am hopeful that given your amiable nature, the 9th National Assembly would work in harmony with the Executive and the Judiciary in the interest of Nigeria and its people.”

He further prayed that God Almighty would give Lawan the strength and wisdom to steer the affairs of the Senate to justify the confidence his colleagues, the party and the generality of Nigerians reposed in him.

To the Deputy Senate President, Sen. Omo-Agege, Baru noted, “It was a victory won to the delight of your numerous supporters and well-wishers across the Country.

“I have no doubt in my mind that your immense wealth of experience in the Red Chamber would be an invaluable asset to help you function effectively in your new position as a Principal Officer of the Senate.”

Also in the letter to the Speaker of the House of Representatives, Gbajabiamila, he added that his election was apt as Nigeria yearned for politicians of sterner stuff.

He added that the Speaker of House of Representatives’ election was a testament that the Country was making progress towards purposeful leadership.

“The House of Representatives is a critical stakeholder of the Nigerian Oil and Gas Sector.

“My colleagues and I in the Petroleum Industry wish to assure you of our readiness to work with the Legislature to chart a new course on Industry issues requiring your support,” he said.

Congratulating Deputy Speaker of the House of Representatives, Baru enthused that his emergence was a confirmation of his immense popularity amongst his colleagues.

He urged him to use his acceptance by the majority of the members of the House to positively direct the course of the Assembly along with the Speaker.

The four principal officers of the 9th National Assembly were elected and sworn in on 11th June, 2019 in Abuja.