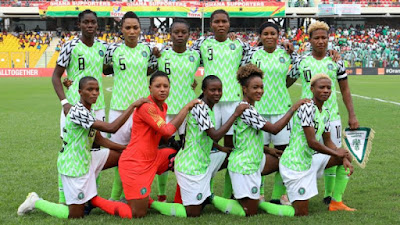 Nigerians have hailed the sit-in-protest by the Super Falcons over unpaid allowances and bonuses after crashing out of the 2019 Women’s World Cup in France.


You will agree that something is wrong with Nigeria when the NFA didn’t pay the Falcons their allowances & they have to protest at their hotel, then Kenya! as in Kenya oooo that are yet to kick a ball in the nations cup have sorted their allowances for the group stage SMH
— fèmí (@AriesFemi) June 23, 2019

Wrote this piece after @NGSuper_Falcons won the 2016 @CAF_AWCON in Cameroon and did hotel sit-in protests over unpaid wages and bonuses, as witnessed now. Three years on and you kind of see that nothing ever really changes with the @thenff. #FIFAWWChttps://t.co/hC92E2C6Wx
— Olakunle FAYIGA (@kfayiga) June 23, 2019


History would be cruel to anyone destroying Nigerian Football! Do you know why Nigerians with dual nationality opt to play for other countries Uncertainty! Unpaid bonuses! What a shame of a nation. You don't get paid until you protest.@thenff @NGSuper_Falcons @ColinUdoh @MBuhari
— Tom Udeme (@tomju1) June 23, 2019


The Falcons on Sunday morning refused to vacate their hotel, insisting that their allowances and bonuses must be paid.

The unpaid allowances include extra camping allowances for five days, unpaid bonuses/allowances from 2016 and 2017, and FIFA participation fee for playing in the tournament.

Before the protest, the Falcons reportedly held an overnight meeting with officials of the Nigeria Football Federation but were not convinced with the resolutions reached.

Though the meeting resulted in the delay of some players who missed their flights, five of them got their allowances after the protest.

FIFA had stepped in on Sunday morning after the players missed their transport to Paris and subsequently their flights, and the NFF were advised that any further expenses incurred by the team’s continued stay would be deducted from their participation fee.

The Falcons then stopped the protest and left their hotel. The players are expected to arrive in Abuja on Monday.

A member of the NFF reforms committee, Osasu Obayiuwana, tweeted, “We do not owe the Super Falcons any money, except the five extra days camping allowance. We have already paid out the FIFA WWC bonuses for the South Korea match.

“If only five players have received the money, it is not because NFF has not paid it. It is now a bank-to-bank transaction. It is no longer from us. With regards to the 30 per cent FIFA WWC payment, they want it in advance, but cannot pay them until FIFA pays us.

“All bonuses from 2016 have been paid. The problem is that the players wanted to receive bonuses for home matches in US Dollars when they were paid in Naira. They demanded Dollar payments. That is not the rule.

“During the Africa Women’s Cup of Nations in Ghana, the Falcons were getting $10,000 as match-winning bonus. Were they not paid? I think the players should be fair to us. As at this moment, we have not received a penny from the government for the Women’s World Cup. We are facing a lot of challenges.”

Reacting to the Falcons’ protest, Nigerians wondered why the NFF refused to do the right things until the players protested.

They accused the NFF of tarnishing the image of Nigeria, lamenting that Nigeria players deserve praise and not embarrassment.

Oladimeji Ibrahim said, “Why is NFF like this? The same thing happened to U-20 team. Owing of bonus is a very bad habit to the NFF. NFF should please pay their bonuses – both the Falcons and U-20.”

“Pay those girls; they’ve tried for us. Don’t be too quick to forget their good deeds on that green white green jersey,” Samuel Chukwu added.