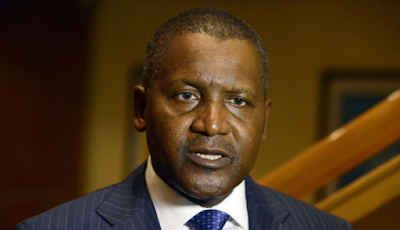 He made this known during the Dangote Sugar Annual General Meeting (AGM) in Lagos on Tuesday.

He said that the smuggling activities in the sugar industry had hindered the employment of at least 250, 000 Nigerians.

According to him, it has also led to economic sabotage.

Dangote acknowledged that negative activities made 2018 a challenging year for the company.


He identified the influx of smuggled sugar into key markets nationwide as one of such negative activities.

According to him, the Apapa gridlock also affected the evacuation of products from the refinery and constrained logistics operations, distribution, and delivery to customers.

He said that the performance of Savannah Sugar Company was impacted by communal clashes between the host community and herdsmen.

The industrialist said that the situation led to the closure of the company for more than three months.

The business mogul said that despite the challenges, the company continued to post resilient performance.

He disclosed that the company achieved a Group turnover of N150.4 billion, a 26 percent decrease over N204.4 billion posted in 2017.

According to him, a profit before tax of N34.6 billion, and a profit after tax of N22 billion Naira.

He disclosed that the Board recommended and shareholders ratified the payment of a total dividend of N13.2 billion, being N1.10 per ordinary share of 50 kobo for the year ended December 31, 2018.

Mr Ravindra Singhvi, Chief Operating Officer, Dangote Sugar Refinery, said that the future outlook for the company was to continue to leverage on its strength.

He said that the company would maximize opportunity to generate sales, increase market share and create sustainable value for all stakeholders.

Singhvi said that though the terrain remains challenging, the company was committed to rapidly adapting to market changes and employ numerous levers to mitigate major effects on performance in the years ahead.

He also advised Dangote Sugar to explore the option of having a cube sugar in its range of products to shore its earnings.

He said that many consumers were shying away from the consumption of sugar due to fear of diabetes, adding that achieving a breakthrough in the research would assist to increase their customer base.

It was gathered that Dangote Sugar Refinery, Apapa, is one of the largest sugar refineries in the world, with 1.44 metric tonnes per annum installed capacity.

With a current 70 percent capacity utilisation, the company is implementing various initiatives and projects toward continuous improvement in operations, targeted at sustaining its leadership position in the Nigerian sugar industry.