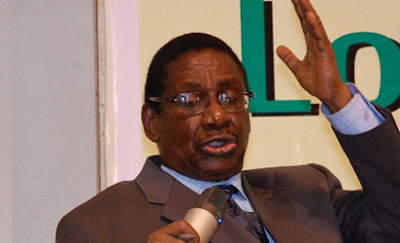 Chairman of the Presidential Advisory Committee Against Corruption, Prof. Itse Sagay, has commended the All Progressives Congress administration under President Muhammadu Buhari for stepping up the fight against corruption in the country in a bid to ensure good governance and development.

But he lamented that jailing corrupt people was a desperate and wasteful effort given the weakness in the country’s judicial process.

He spoke during a workshop organised by the PACAC in collaboration with the National Orientation Agency which held in Jos on Wednesday.

The programme with the theme, “Value re-orientation and the fight against coruption “ was attended by top government officials, including permanent secretaries, traditional rulers as well as leading civil society organisations and political activists.

Sagay said, “Corruption has primarily been fought by the Federal Government in the country. There is too much focus on financial corruption but the truth is that nepotism is a more serious problem.

“After our evaluation in the fight against corruption, we discovered that jailing people is a desperate and wasteful effort. It is going to be difficult to have convictions because of the weakness in the judicial institution. And that is why we have concentrated more on asset seizure of corrupt people as the way to go.”

Sagay who was represented at the occasion by a member of the PACAC, Prof. Etannibi Alemika, further maintained that for the country to win the war against corruption, there must be value re-orientation among its citizens.

According to him, a situation where promotion of values that abhorred hard work, accountability, transparency and commitment to common good had become the norm among Nigerians was not good for the country.

He urged the citizens to expose corrupt individuals in their midst irrespective of their political, social or religious affiliations in the interest of the country’s development.

Governor Simon Lalong who declared the workshop open, said his administration would not spare anyone found to be engaging in acts of corruption.

He noted that corruption had done more harm than good to the country’s socio-economic progress and urged Nigerians to join hands with the APC administration in the anti-corruption fight.