I bear no grudge against Ganduje, says Sanusi 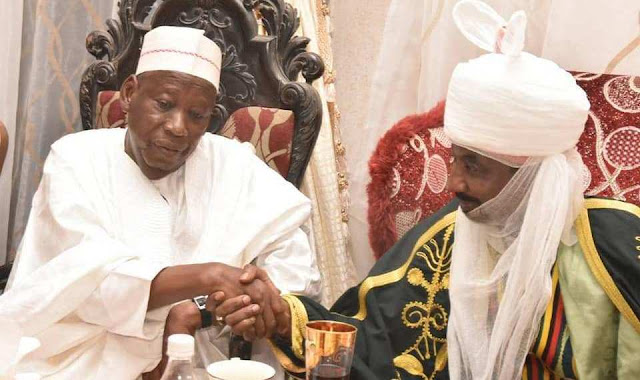 Muhammadu Sanusi II, emir of Kano, says the emirate council under him holds no grudge against Abdullahi Ganduje, governor of the state.

Sanusi made the remarks when members of the Kano state assembly paid him a courtesy visit at his palace on Tuesday.

The emir and the governor fell out shortly after the general election. There were reports that the monarch opposed Ganduje’s reelection and in turn, the governor assented the bill to break the emirate into five.

Subsequently, the state anti-graft commission revived a probe against the governor, indicting him of N3.4 billion fraud and recommending his suspension.

Ganduje, through the the secretary to the state government, later issued a query to Sanusi.

But prominent Nigerians, including Aliko Dangote, Africa’s richest man, and Kayode Fayemi, governor of Ekiti, waded into the dispute.

Earlier on Tuesday, Ganduje said efforts to end his dispute with Sanusi were ongoing.

Sanusi told the lawmakers that the council was always ready to work with Ganduje for the development of the state.

He added that the state government had entrusted him with the task of improving the industrial profile of Kano by revitalising the moribund industries in the state.

Sanusi also urged the state lawmakers to be diligent and committed in fulfilling their responsibilities and mandates.

“As leaders, you are expected to be spectacularly honest and have the fear of God in whatever you are doing,” he said.

“You should all remember that you will one day die and be made to account for your deeds, while in the saddle of authority.

“You and I and everybody are not immune to such investigation by God, who created us to serve humanity as leaders.

“We will be made to account for our deeds and we will also be judged by posterity for being at the helm of affairs and what we did whether it is good or bad, will be the legacy we will all leave behind.”