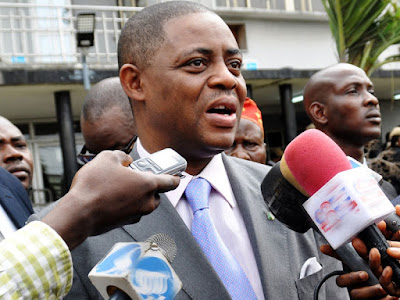 Femi Fani-Kayode, former Minister of Aviation has hailed the removal of Festus Adebayo as the Special Adviser on Media and Publicity to Senate President Ahmad Lawan.

Lawan took the decision, barely 48 hours after appointing Adedayo as Special Adviser on Media and Publicity.

This came after some supporters of the All Progressives Congress (APC) kicked against the appointment.

Speaking on the development, Fani-Kayode urged Festus Adebayo to be rejoicing on his removal as Lawan’s aide, adding that he has just being saved “from the greatest calamity that could have possibly blighted and afflicted his brilliant and extraordinary life and career”

According to him, Adebayo should offer thanksgiving for his removal as he has just been saved from ‘APC evil spell’

Fani-Kayode on his Twitter page wrote: “Serving any branch of the APC government is like serving Hitler’s Nazis. God just delivered Festus Adedayo from the greatest calamity that could have possibly blighted and afflicted his brilliant and extraordinary life and career.

“He did not eat the King’s foul meat and he did not fall under their evil spell.

“He should do thanksgiving in his Church and he should bless his Pastor with a massive offering.

“He may not know what God has just delivered and saved him from but one day he will appreciate it. I thank God for his beautiful life.”

Meanwhile, Adebayo accepted criticizing Buhari but stated that he would not bear grudges against those who made him lose the job.

He said: “Of a truth, I am a venomous critic of President Muhammadu Buhari, with no apologies. Asiwaju Bola Tinubu, Adams Oshiomhole, Ibikunle Amosu, Bukola Saraki and several others have been on the receiving end of the unkind temper of my pen.

“What those who are vilifying me for always writing against government should have done was to rise from their laziness and conduct an x-ray of my writing. In my close to 20 years of public sphere intervention …I believe that government should reflect the highest moral echelon of society and those who run it should make covenant of chastity and fidelity with themselves,” Adedayo said in a statement.