Flood destroys goods worth over N15 million goods in Aba 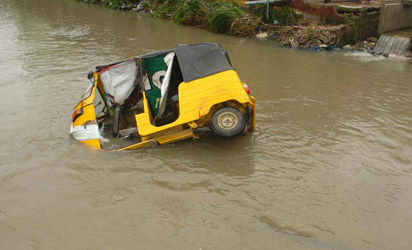 A heavy downpour on Wednesday night in Aba, the commercial hub of Abia, has left many homes, shops and markets submerged by flood.

Reports say goods estimated at over N15 million were also destroyed by the flood.

Mr Obinna Ogugua, a trader in the market, was said to have lost 32 bales of clothes, worth about N2.9 million.

The more than six hours rain also flooded the Ahuronye, Nwaogu and Mathew streets on Obuda/Eziukwu and Ohanku roads in the Ndiegoro area of the city, leaving many houses flooded.

The unfortunate development also rendered scores of residents of the area homeless.
A resident, who spoke on the condition of anonymity, said that he lost all his household items to the flood.

He said that it took the intervention of neighbours to save some children, especially those whose parents were away during the downpour, from being swept away by flood.

Mr Okechukwu Egechi, a landlord in the area, said in an interview that Wednesday’s experience was not new to them.

Egechi, however, said that the extent of flood and resultant damage of property was significantly higher than similar incidents in the recent past.

He said that he was away when the rain started, but regretted that it was difficult for him to access his house when he returned at end of the rain due to the heavy flood.

He said: “We have been complaining about the poor drainage in this area for many years, but nobody listened to us.

“It is so bad that we have people representing us at the state and federal levels but they do not know about the perennial flooding facing us.”

Egechi, who claimed that he lost all his property to the flood, also said that he nearly lost his 13-year old daughter to the flood.

“As I was told, she was the last to leave the house and suddenly fell into the flood but was rescued by neighbours,” he said.

Mr Oriaku Chisom, a Senior Pastor at the Garden of Life Ministries, situated at No. 6 Ahuronye Street, said that flooding had become a perennial problem in the area.

Chisom said: “The situation is not new. It has become an annual incident and usually takes residents unawares.

“What is happening is simply a sheer sign of neglect by our political leaders. People will suffer and buy household equipment only to lose them to flood every year.”

He said that although he was sent parking from his residence in the area by flood some years ago, his church was still situated there.

He regretted that the Federal Government’s contract through the Ecological Fund Office for the reconstruction of the drains to properly address the flood menace was allegedly abandoned.

“We are calling on our leaders, from councillors, council chairmen, state and federal lawmakers and the governor to urgently intervene in order to save the residents from the disaster,” Chisom said.