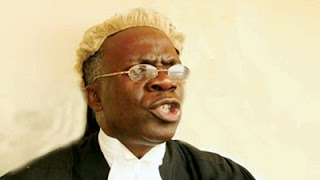 Human rights lawyer, Mr. Femi Falana (SAN), has said it is expected that the police and the Department of State Services will withdraw their ‘armed goons’ from the premises of the Africa Independent Television and Raypower 100.5FM immediately.

Falana said this in a statement on Saturday while congratulating Daar Communications for gaining its TV and radio licences back.

The human rights lawyer, who was incarcerated several times by different military regimes, said the shutdown of the stations was reminiscent of the dark era of military dictatorship.


He said, “The closure of media houses was a common phenomenon under the defunct military dictatorship in Nigeria. Since the restoration of civil rule 20 years ago, the dangerous trend has continued under successive regimes either through military invasion of media houses or seizure of copies of newspapers.

“The NBC has just lifted the suspension of the licences of the AIT and Raypower FM Radio stations in compliance with the ex parte order granted by the federal high court. It is hoped that the authorities of the Nigeria Police Force and State Security Service will withdraw the armed goons mounting siege to the compound of the AIT/Raypower FM stations without any delay.”

The senior advocate said as far as democratic forces in the country were concerned, the battle for press freedom had been won, once again.

He, however, described the victory as temporary and should be celebrated with caution.

Falana added, “Even under the most vicious military junta in Nigeria the courts ordered the reopening of the premises of the National Concord and Punch newspapers which were illegally closed down and occupied for months by armed troops. And the court orders were complied with by the military dictators.”

The senior advocate said the National Broadcasting Commission had powers to regulate broadcasting regulations under the law but the powers were not absolute.

He said such powers must be in accordance with the constitution which also guarantees press freedom.

The activist said the NBC can obtain court orders against errant stations when necessary instead of acting in a manner that seems dictatorial.

Falana added, “No doubt, the NBC has been empowered by the NBC Act to regulate all broadcasting organisations in the country. But in exercising its wide powers NBC has to be made to appreciate that it can no longer operate outside the ambit of the constitution as was the case under military rule.

“But as no freedom is absolute the NBC may be compelled by unforeseen circumstances to suspend a media house in the public interest. For instance, a broadcasting house that decides to announce fake result of a general election may be temporarily shut down. Even in such an emergency situation, the NBC will be required, as soon as possible thereafter, to apply for a court order to legitimise the closure.

“Alternatively, the NBC may request the Attorney-General to charge a media house for breaching the provisions of the NBC Act or penal statutes. Otherwise, the powers of the NBC may be arbitrarily exercised to the detriment of law and order in the society.”