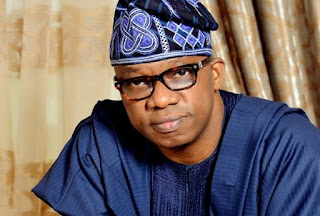 The Allied Peoples Movement (APM) in Ogun State on Tuesday expressed worry over Governor Dapo Abiodun’s claims to borrowing N7bn to pay May salaries of workers and described it as “gross irresponsibility.”

APM further described Abiodun’s claims as a sign of one who is unprepared to govern the Gateway State, also lamenting that the Governor is making jest of the electorates who voted him into office.

The Governor had in an interactive session with APC stalwarts in Abeokuta on Monday claimed he borrowed over N7billion through his “friends” who are bank managing directors to pay May salary of Ogun workers.

But the APM in a statement by its Acting Publicity Secretary, Olumide Balogun, wondered how such huge sum money could be borrowed by a Governor without the approval of the Ogun State House of Assembly.

The statement reads in full: “The Allied Peoples’ Movement (APM) Ogun State has described Gov. Dapo Abiodun’s claim that he borrowed N7b to pay May salary as the height of unpreparedness and gross irresponsibility on the part of a man who was declared winner of an election as far back as March 10th, 2019.

“We are very sure by now, the good people of Ogun are beginning to understand the true meaning of democracy and what good governance entails. This is because the newly formed government of Dapo Abiodun is doing nothing other than making jest of them; distorting their reasonings and presenting government businesses as a help to the electorates which in real term means services.

“Latest in his jokes is the statement credited to the governor during an interactive session with APC stalwarts in Abeokuta on Tuesday, where he claimed to have borrowed over N7billion through his “friends” who are bank MDs to pay May salary of Ogun workers.

“We must note that he took oath of office in May 29th, 2019 and information had it that his predecessor, Senator Ibikunle Amosun had already prepared the cash for payment before handing – over to him on May 28th, 2019.

“It is a surprise that a governor who had barely spent 3 days (as at May 31st when the payment was made) in office had borrowed such huge amount to pay salaries alone. We therefore considered it crucial to seek clarifications from the governor on the following questions:

Can a State governor unilaterally obtain a loan of N7billion from any bank(s)?. Most especially when there is no state executive council in place?
Would such borrowing not require the Approval of the OGHA?
Is such a transaction in line with the Financial Regulations? Or was the transaction made based on personal relationship or onbehalf of the state government? At least, he is already the governor of the state.”
“In effect, this statement is a concoction of lies and clear evidence of lack of preparedness for governance by Dapo Abiodun.

“Indeed, enquiries suggest that the State received over N5billion from the FAAC for May, which should be more than enough to cover staff salaries including what Senator Amosun left in the state treasury for the new government. What happened to all these monies within 48 hours?

“We must not forget quickly that Dapo Abiodun resumed office with a brand new 2019 G-wagon worth of N127million as his official car and changed the entire governor’s fleet. This must have cost him hundreds of millions of naira of tax payers money.

“This is a man who is speculated to have spent billions of naira to procure his way to Oke – Mosan and no doubt, will seek any way possible to quickly settle his debts especially when APM and LP are challenging his victory at the election petition tribunal and court of appeal respectively.

“Well, most people who know Dapo Abiodun before his miraculous emergence in the state are not surprised about this development and his extravagant lifestyles. However, we will implore him to stop making jokes of Ogun and short – changing the masses.

“May God help us in Ogun State because if the governor can borrow N7billion to pay May salary alone, only God knows how much he would have borrowed in the next 3months (till APM Victory at the Tribunal) for such purposes, whereas, he is yet to hit the ground running; projects wise.

“The essence of 2 months between date of emergence and swearing-in is to enable the governor prepare for the business of government. It is elementary for a responsible government to know that salaries will be due on the 31st of May. To claim surprise that the salary “crept” up on him is most irresponsible.

“We hope this phantom “N7billion loan” claim is not Anticipatory Looting!